The red planet Mars in the natal chart shows the level of determination in achieving success, willpower, charisma and passion, but also warns of the dangers and injuries characteristic of the zodiac sign and the home of its stay. In the female horoscope, the warlike planet reflects the appearance and character of the desired man.

Mars in the constellation Taurus is ruled by Venus, which prevents it from manifesting outwardly. People born with Mars in Taurus give the impression of a peaceful, shy and easy-going people. No one knows with what efforts they restrain the passions raging inside. If others tease, offend, infringe on interests for a long time, then the stormy Martian lava will explode and destroy the aggressors in blind rage.

The owners of Mars in Taurus harness for a long time, but then they rush at full speed. The priority is material wealth and property ownership, especially if the planet falls into 2 or 8 houses. For the sake of financial well-being, they go ahead, despite obstacles, for example, when there is a threat to a peaceful existence in prosperity or the need to fight with competitors.

The calm and benevolent native suddenly turns into an angry Minotaur, punishing enemies who encroached on his property. Under normal circumstances, the carriers of Mars in Taurus prefer a passive strategy, unobtrusively demonstrating success or modestly waiting until they are noticed, which, oddly enough, bears good results. The impact of Venus on the scarlet planet is expressed in characteristic signs:

Children with Mars in Taurus need to be taught to express feelings and protests in words, and not keep silent aside from the offenders, and also share on mutually beneficial terms. They have a keenly expressed sense of ownership, which is why it is easy to be branded as greedy, and laziness, although if the subject is interesting, then there will be no more knowledgeable student than the native. 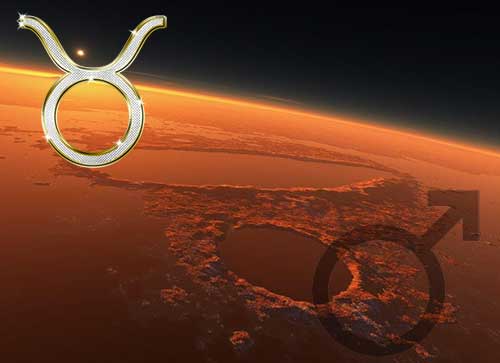 Even a strong and deep feeling will not push the owner of Mars in Taurus to take initiative in a relationship, although she can indirectly show the passion of nature through a demonstration of homeliness: treating herself to amazingly tasty pies or giving skillfully knitted sweaters.

She has high ideals: the chosen one must be charming and physically developed, secured and promising, so she is in no hurry with the choice, waiting until the last. Having fallen in love, she will be faithful, happily devote herself to home and inventing pleasures for her beloved husband, both in cooking and in intimate life. A good companion for her will be a man with Mars in Taurus, Capricorn and Virgo.

The energy of a young man with a scarlet planet in the earthly element is grounded and is aimed at obtaining material comfort: a cozy, conveniently located apartment, a job with a stable income and a pleasant environment, a sweet, caring wife. He is practical and romantic at the same time, showing signs of attention through gifts and flowers, since he does not know how to conquer a pretty woman with words.

Love is expressed through actions and materialized symbols of feelings, and generosity is manifested when there is already confidence in the continuation of a strong relationship. In conflicts, the carrier of Mars in Taurus does not climb on the rampage, but he will not be able to restrain his rage if important inner values ​​or someone close to him are insulted. He is caring and attentive, but he demands the same for himself. Venus in Taurus, Virgo or Pisces will be a good companion for him.

The first ruler of the constellation Taurus is Venus. Any aspect of Mars with its increases passion, sensuality, creative energy and the desire to leave a mark on history. Square and opposition give vivid love with many obstacles that only excite the blood and make people do stupid things. Such intensity of feelings overloads the nervous and emotional sphere of the soul. The harmonious relationship of Mars with Venus is an excellent tandem for achieving success when inspiration and passion are subject to will and ability to work.

The second ruler of Taurus – Chiron in aspects with Mars gives uncertainty and doubts about the topic of the house of residence, which is carefully hidden by the native through feigned bravado, as well as difficulties with gender identity when there is a bias of character or appearance towards the opposite sex. It is good if there are harmonious aspects with the Moon in women, Jupiter or Saturn in men, harmonizing the inner state.

As soon as something occurs to people born with Mars in Taurus, they will strive towards their goal with all dedication, determination and incredible dedication. Such people never give up and changing their minds or changing courses in the middle of the journey is a big challenge for them. Whatever they set their sights on, they will never give up and let go of their goals. People with such Mars forgive mistakes until someone betrays them – it infuriates them. Taurus usually patient and not annoyed, only if there is no good reason for this, then they become angry akin to a bull. They are reliable and consistent, while handling more stress than the people around them. Taurus prefer a daily routine with their daily routine, responsibilities and tasks, and they also enjoy building and the visible results of their hard work.

The things that people can touch have a lot to do with them. Such individuals need to see practical results, not theory. People with Mars in the sign of Taurus will never be content with intangible objects, such as just a pleasant pastime. At the same time, they have laziness, love of comfort and inertia that must be overcome before moving forward. As soon as they receive an impulse, their energy increases and gives an opportunity for development. Doing business is their forte, especially if someone else starts them.

Material well-being and security are the main and determining factors in what they do. Their endurance and perseverance is a driving force that can also work against them, as they can get stuck in a rut and refuse to take advantage of new opportunities, constantly being reinsured and limiting themselves.

Change scares them as much as sickness and pain. Sometimes a stubborn streak awakens in them, and then no one can influence them or convince them. Possessiveness and jealousy can also cause serious relationship problems. Money and things that are so important to Taurus provide them with a sense of security. They need to rethink their values ​​and cultivate shared distribution. Taurus’ talkativeness can sometimes also be uncontrollable.