The planet Mars shows how people with such position are brave, resilient and are able to resist failures in the struggle for their own interests. By the position of the celestial body with the name of the god of war, they can calculate the source of injuries and troubles, correct behavior that leads to troubles. In the girl’s card, the red planet indicates an attractive male type for her, as well as the level of passion and conflict.

Mars in Libra is in a conflicting position. In an effort to restore justice and order through compromises that suit all parties, the native cannot say a decisive “no”. As a result, this fly in the ointment spoils the whole barrel of honey, or at least gives the desired result an unpleasant shade. To achieve success, the carrier of Mars in Libra needs strong and disruptive partners, for example, with Mars in Aries, in tandem with which air sign diplomacy will give a brilliant perspective.

The owners of Mars in the sign of Libra always strive for co-authorship and collaboration. It is uncomfortable for them to move towards the goal, and even scary, but in a company, paired with a like-minded person or a spouse, they grow wings and a previously unknown decisiveness appears, which is impulsive.

Pondering for a long time the upcoming actions, the wards of Mars in Libra are annoyed by their own hesitations and internal dialogues on the pros and cons. Tired, they rush into the abyss with their eyes closed, clinging to the momentary emotion. Due to the endless struggle in the mind and soul, these people are unpredictable: friendliness and charming courtesy are suddenly replaced by cold arrogance or hot anger, and a subtle understanding of artistic and religious culture is adjacent to a craving for the vulgarity and obscenity of the dark side. It is easier to understand the range of contradictions by knowing the main points of the influence of Mars in Libra on individuals:

Children with Mars in Libra, with the support of a large digging of friends, achieve great success in the creativity and social life of the school. They are very interested in social life and the organization of holidays, which ensure their popularity. In this situation, the confrontation between indecision and ambition disappears. 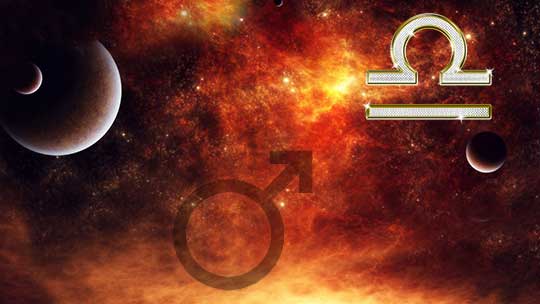 Love at first sight was invented by men with Mars in Libra. Beautiful, passionate, eloquent, they fall in love with exquisite beauties and immediately think that they are in love for life. Having studied all the subtleties of a woman’s nature and enjoying a romantic foreplay, they easily turn their heads and start an intimate relationship early, but they torment the chosen one for a long time with the expectation of a marriage proposal.

It’s one thing to have a passionate romance, it’s another to commit themselves. Under the influence of an impulse or on a dispute, they can enter into a hasty marriage, which they later regret. Refined and artistic Mars in Libra does not tolerate hysteria and a showdown. The erudite and graceful Venus in Libra, Leo or Pisces will suit him.

A girl with a similar position to the scarlet planet embodies the sensuality and sexuality of the highest plane without an ounce of vulgarity. A beautiful Lady at a social event dreams of a worthy gentleman or gladiator from the arena, whom she will make happy with her bright image. The main thing is that the chosen one should be handsome in appearance like Apollo. These contradictions often push her into a misalliance.

A woman with Mars in Libra prefers to delight her companion, rather than experience it herself, and cannot live without communication, discussion of important political problems, and a joint search for an ideal solution to problems. A suitable partner for her would be a man with Mars in Gemini and Leo.

The native’s magnetic physical attractiveness and beauty are enhanced by favorable aspects with Venus, the first ruler of the sign of Libra. They endow the stylist and artist with artistry and delicate taste, and in the presence of harmony with Mercury, literary style, eloquence and persuasiveness in disputes.

Tense aspects give excessive voluptuousness and licentiousness, and if the destructive influence of the second ruler of the sign, Chiron, is added, then the difficulty in determining gender, attraction to criminal entertainment, threat to life during a dispute in raised voices. Positive configurations with Chiron give a strong tandem of mind and will, a hypnotic gaze, the ability to subdue with a gaze. The evil aspect of Mars with Uranus portends the danger of heights and unexpected injuries.

People born with Mars in Libra often fluctuate between their assertiveness, aggressiveness and the desire to do things their own way, and at the same time they want to please everyone and compromise. Such people have a strong attraction to the opposite sex, and if Mars is also in aspect, then they become popular and interesting. But if Mars is not in aspect, then this, on the contrary, can lead to criticism from people, and the opposite sex will often change, and they will just play with the feelings of people.

Fluctuations between the desire to cooperate and compete are present in the Mars people. They are looking for a balance between acting independently and confidently and working together with others. They can often feel frustrated that they can’t just do what they really want, because they always have to consider the wants and needs of others.

People with Mars in the sign of Libra can feel indecisive, in order to start acting and move forward, they need to feel the support and approval of other people. In any case, such individuals are not alone. They achieve their goals by collaborating with others, being in a team. They strive for fairness, and they can become quite aggressive if they feel that someone has been treated unfairly. They are well versed in legal matters. Try to avoid extreme, advocate a balanced and moderate approach to life. They are unlikely to force themselves to forcibly achieve their goals. They tend to be persuasive, insightful, calm, and enthusiastic, although sometimes they can argue. Most likely, they need to work on diplomacy and patience.