Mars is a symbol not only of belligerence and aggression, but also of will, courage, resistance to enemies and minor troubles. It shows the degree of passion and the source of energy in the life of a native, and in the horoscope of women it characterizes the image of a beloved man, which ignites the heart.

Mars in Capricorn is exalted, and therefore incredibly strong, although its power, like lava in the depths of a volcano, is not immediately visible. The reserve of energy and will is inexhaustible and manifests itself when the goal is clearly defined or in extreme situations when it is required to take on a leadership role. Courage, organizational skills, combined with intuition and contempt for obstacles, provide a dizzying career and the sympathy of loved ones.

The owners of Mars in Capricorn are great and as executors of someone else’s will, they obey orders and clearly fulfill their duties, working overtime. However, ambition and desire to receive awards for work will not allow them to stay at the bottom of the career hierarchy for a long time. They enjoy overcoming difficulties and obstacles to such an extent that they create them themselves and happily punch the path to success.

Outwardly, the carriers of Mars in Capricorn are calm, since they consider the manifestations of anger and resentment to be weakness. They just end relationships with unpleasant people without any explanation. Winning the heart of Saturnian Martians is not easy: they value professionalism, calmness and confidence, healthy ambition, and welcome friendships with successful individuals. Knowing the main character traits of Mars in Capricorn, it is easier to find an approach to it:

Children with Mars in Capricorn are careful and discreet. They know when to step aside from the beginning of the fight, so that they do not inadvertently hurt, do not go into conflict with the teacher, they always complete their lessons on time. To be successful, they need to see a high goal in front of them. Having conceived of becoming a military leader or the head of a company, they use every means to thoroughly prepare for a brilliant future, developing intelligence and external attractiveness. Pessimism and stiffness will disappear with regular music and painting. 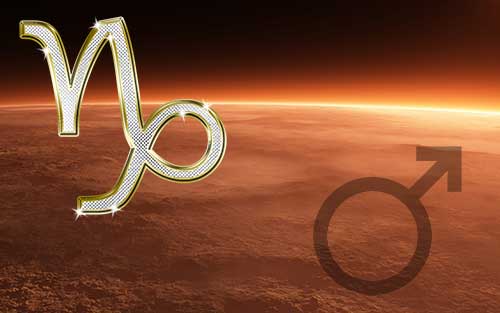 Despite the outward representativeness and status, men with Mars in Capricorn are terribly afraid of being rejected. The sphere of feelings is initially shaky and strange territory that cannot be calculated, so they hide sympathy to the last, not understanding what to do with the fragments of a broken heart.

Feeling reciprocity, the native flourishes and gives free rein to the enormous power of the soul. He is not able to arrange romantic surprises and sing serenades under the windows, but prefers to shower his beloved with material evidence of his feelings: from expensive gifts to real estate and cars. He is a faithful husband, sacredly honoring the vows of marriage. In intimate relationships, he is conservative, although he dreams of bold experiments, which the relaxed and ambitious Venus in Leo and Aquarius will help him to carry out, and the quivering Venus in Pisces and Cancer will become a faithful loving companion.

An overbearing and categorical woman with Mars in Capricorn, under the influence of Saturn, prefers a conservative style of clothing and sleekly gathered hair, but an icy fire burns in her eyes. This is a real volcano of passions, waiting for the spark of love to erupt in a hot stream of devoted love. However, she lacks feminine charm and gentleness, and her harshness and directness of speech repel most fans.

She dreams of a powerful leader, financially and professionally held, with whom she can ascend the throne and rule the world. The iron will and hard work of the bearer of Mars in Capricorn quickly raise her to higher positions, and a misalliance is unacceptable for her. Sometimes, to strengthen their fortune or business, they get married of convenience. Mars in Taurus, Virgo or Capricorn will be a good companion for her.

The favorable aspects of Mars with the ruler of Capricorn, Saturn, endow physical and psychological strength, endurance, the ability to emerge from the most difficult trials with honor, but block the expression of emotions and creative impulses. The native falls in love with elders, marriage of convenience or loneliness of their own accord is also possible, especially when Venus is struck in the 7th house.

The tense ties of Mars with Saturn threaten to break and suppress the will of these inidividuals themselves, or portend the destruction of fate on their part. A harmonious union with the co-ruler of Capricorn, Uranus, gives overactiveness and a thirst to test oneself for strength in sports and in the materialization of ideas, at first glance, unrealistic. It is also a harbinger of future exploits, especially in the presence of a trine with the Sun.

Their actions reflect ambitions for power, recognition, honor, and position. Such individuals don’t want to follow anyone. They want to take the lead in everything they do. If they fail, they are capable of becoming  cruel manipulators who demolish anyone who gets in the way.

Mars in Capricorn endows people with productivity, perseverance, resilience, organization. They are  practical, goal-oriented and disciplined people with the intention of achieving success. Their spirit and energy are directed towards the implementation of practical material and the achievement of concrete results. Such people perform well and are able to sacrifice convenience for long-term goals. They can easily become a workaholic. They are very responsible and conscientious about their meticulous work. They do not go on adventures in the implementation of their plans, and prefer the traditional, proven path that they follow. Such individuals rely more on their own strength and perseverance than on luck.

Mars with Capricorn in the natal chart bestows natural insight and flair for business or organizational work. Such people are ambitious, persistent, patient, responsible and self-sufficient people. Learning is hard for them, but they learn everything well. They are wasting their energy deliberately. Success is very important to them. Bad sides include quick irritability that needs to be controlled and feelings of resentment towards others for perceived wrongs. They should learn to forgive, forget, and treat their emotions and disappointments in a positive way.