The planet Mercury is responsible for communication in the team, the type of thinking and the level of intelligence. In Sagittarius, the messenger of the gods is in exile, however, this is not at all a sign of a limited mind, rather the influence of Jupiter , prompting to think not in breadth, but in depth, to teach even unfamiliar people, not to mention the constant educational process of loved ones. At the same time, the owners of Mercury in Sagittarius do not see shortcomings, being tuned in to improve the external world.

They say the truth straight from the shoulder, even if it threatens disgrace and loss of friendship. Truth is dearer than reputation, or the individuals simply bear in a burst of inspiration, and they are unable to conceal even a grain of information. This is harmonized by the professional activities of a guide, teacher or translator, but friends should not trust these carriers of Mercury in Sagittarius with terrible secrets that they are not able to keep.

Such individuals are cheerful and optimistic peeple, know many anecdotes, although sometimes they insert them out of place. They like to replace words of their native language with foreign ones, have an interest in other countries and prefer professions that involve traveling abroad.

There is a high probability of getting into accidents due to inattention or due to arrogance, but thanks to the patronage of Jupiter, everything ends well for these individuals. The owners of Mercury in Sagittarius often have a split personality and a number of characteristic features that appear weakly or brightly depending on the position in a particular house of the horoscope:

It is easy for these owners of Mercury in Sagittarius to captivate crowds of people with their own convictions, since they always sincerely believe in what they preach, even if they do not fully know the whole essence or consequences. Most of all they are interested in the topic of success and personal growth, since they initially aim for higher positions. If there is a start of conversation in this direction, these individuals will easily make contact and share their knowledge. 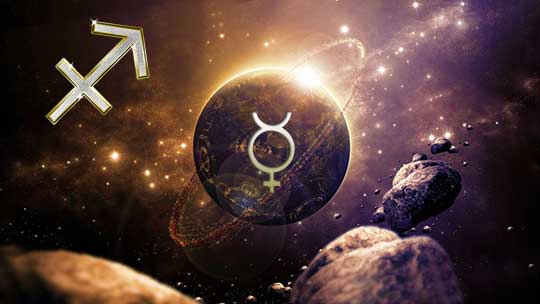 Mercury in Sagittarius in the stronger sex gives an exaggerated gallant or arrogant behavior, a tendency to talk with aplomb, excessive gestures and humor on the verge of decency. Any action to demonstrate intelligence and make acquaintances looks deliberately feigned, although the native is most often sincere, simply does not insinuate himself from the outside.

He will not hold a stone in his bosom, but if personal circumstances have changed, he will easily forget about these obligations, even if it is a prepaid wedding with many guests. The owner of Mercury in Sagittarius loves traveling to foreign countries and seeks to work with foreign partners.

A Mercurian woman under the influence of Jupiter becomes ambitious and inquisitive. She is one hundred percent confident in her own right to truth, considering her personal point of view to be the only correct one, categorically rejecting the opinions of rivals and opponents.

To consolidate success at work, she seeks to make friends with her superiors, but sometimes she goes too far, getting into awkward situations, especially if the boss is of the opposite sex. At the same time, the owner of Mercury in Sagittarius really does not have the goal of getting the boss as a lover, but the directness of her behavior and proximity to higher ranks are often misinterpreted.

The planet in reverse rotation constantly creates a situation for people with Mercury in the sign of Sagittarius, where they are forced to live a groundhog day, meeting people from the past or falling into the same repetitive plot lines of fate.

It is necessary to draw the necessary conclusions and learn a lesson in order to move to the next level. Mercury retrograde in Sagittarius makes the owners silent and carefully choosing their words for public speaking. They no longer speak impromptu, as God puts on their souls, but write and learn speech in advance.

Seriousness and thoughtfulness are enhanced by favorable aspects with Saturn, imagination is turned on when sextile with the Moon, and trine with Mars gives determination and passion in relationships and the manner of self-expression. The conjunction and sextile of Mercury in Sagittarius with Venus makes the individuals sexually attractive to the opposite sex and makes them want to be friends after the first seconds of communication. Negative aspects with Saturn, Uranus and Mars, on the contrary, contribute to the transformation into an arrogant rake who uses people for personal purposes.

People born with Mercury under the sign of Sagittarius have the gift of foresight. Their minds are often occupied with big ideas, plans and goals for the future. They are interested in achieving what is on the horizon, not what they have already passed. They are interested in subjects such as philosophy, religion, politics and education, they are more concerned with theory, concept, abstraction, rather than specific proposals. Such people don’t tend to focus on any one particular industry. They don’t like small details and find it difficult to concentrate on one subject for a long time to get things done. They are looking for psychological freedom while their thoughts follow a standard line. They have a gambling instinct and they can enjoy gambling or speculative trading on the stock exchange.

People with Mercury in Sagittarius are straightforward, stubborn and always express their thoughts. People who know such individuals well mean that they will never beat around the bush. Such people are ready to say whatever comes on their minds. They must learn to restrain their speech, develop tact, and think before speak. Business and advertising, PR can bring career growth for people with this sign. They have a keen mind, impulsiveness and versatility. These people have a tendency to study several subjects and projects at the same time. They are prone to numerous travels for experience, knowledge and wisdom.