The patron planet of intelligence and the ability to get along with the world around, Mercury, in Leo favors the beloved fire element (it is no coincidence that it is located closest to the Sun) and endows the individuals with unusually clear intelligence, broad outlook and creative talents. Bright charisma and an understanding of one’s exclusivity leave an imprint on the behavior of such individuals.

They are sincerely in love with themselves and generously give personal energy to friends and colleagues, even when no one needs it. Born to be a star, use the power of remarkable intelligence to break through to the top. In the absence of spirituality, they use any moves, including intrigue and bribes, to achieve victory and can become a formidable enemy to those who interfere.

Fiery Mercury in Leo gives the gift of an artistic orator who can captivate not just with the frantic energy of speech, as in Aries, but show the described images through facial expressions, gestures and vivid metaphors.

Such individuals give many interesting examples, usually from their own lives, since they always consider their own uniqueness to be the center of the world. The audience inspires the owners of Mercury in Leo for creativity and deeds, and silence and solitude only harm. Depending on the strength and home of the position of the planet, these individuals display the following traits:

When burdened with negative configurations, such individuals become  arrogant braggart-egocentrics, who believe that people exist only to satisfy their ambitions. Vanity, resentment, quarrelsomeness and subservience to the rich and famous prevail over positive qualities. 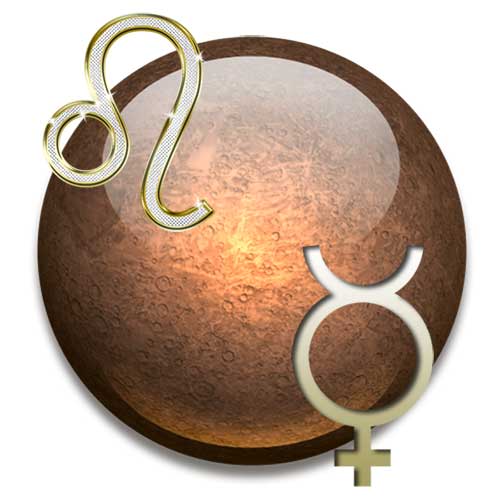 A man with Mercury in Leo brings an abundance of information into the world, expressed in the richness of speech with vivid, figurative comparisons, historical examples and interesting creative ideas, which, however, are rarely original, since Leo is an anti-Uranian type, and he cannot invent a fundamentally new one. under the force. But he is a master at non-standard and effective approaches to solving problems.

In the company, he positions himself as a king, smiling favorably and welcoming his retinue, but allowing only a select few, equal in intellect and flight of aspirations, to come close. Hard going through someone else’s leadership or victory in the competition. Intuition and tact are at a very low level, easily offended, although they do not have this in their intentions.

Unlike a man, a woman with Mercury in Leo is very perspicacious, although her intuition comes from the mind, not from the heart. She instantly calculates the likely lines of development of events, knowing how to benefit even from stressful situations. An unconditional leader, calm and collected at work and unrestrainedly cheerful with friends, witty, albeit often tactless, she was born for success and prosperity, which she goes, regardless of obstacles. The negative position of the planet gives an overestimated self-esteem and encourages to demonstrate superiority over others, due to which there are many enemies.

Mercury retrograde in Leo makes the individuals think that the world revolves around their unique personality, and everything that happens is related exclusively to it. If a girl smiles at the man, he is already sure that she will agree to go on a date and stay with him for the night.

A fleeting flirtation on the part of a companion is enough for a woman to be sure that he is madly in love and intends to marry. Mercury retrograde in Leo contributes to arrogance and familiarity, therefore it is vital for these individulas to shift the focus of attention to the needs of others and not to impose their persona unnecessarily.

The connection of the direct planet with the Sun has a similar influence, although at a high spiritual level of development it gives a leader with a bright mind, leading the crowd of supporters to success.

Aspects with Uranus are favorable – ingenuity and creative ideas, Venus – the lightness and artistry of public appearances, the innate ability to charm anyone, Chiron – the originality of thinking, wit, incendiary rhetoric.

Negative expression is promoted by squares and oppositions with Lilith and Pluto – the desire to become a leader-destroyer, and Saturn – tyranny, conviction of personal righteousness, limitation of loved ones and subordinates in the joys of life.

People born with Mercury in Leo in the natal chart have strong and firm convictions, they like to express their thoughts energetically and clearly. Such people totally identify themselves with their faith. With their speech, they can inspire, persuade, entertain, and of course, they are great at telling stories. Exaggeration plays a key role in their stories. They put on a real show, no matter who their audience is. These individuals have a distinctive style of expression. They are capable of teaching people. They have a lot of creative ideas and always want to have a voice in decision making. They pride themselves on their minds and way of thinking, and others may think of them as a know-it-all.

Those born with Mercury in Leo should beware of vanity, intolerance, stubbornness, and not try to seek recognition for everything they say or do. And they should not get too excited about their own abilities. They can be  good politicians, speakers, group leaders, directors or coaches.