The Moon – Mercury opposition is a disharmonious astrological aspect. But since the nature of the Moon and Mercury is neutral, the influence of the aspect can be attributed to moderately negative.

These luminaries are responsible for the ability to perceive, process, store and transmit information. The owner of the opposition of the Moon and Mercury is very curious and interested in learning, however, he quickly gets tired and is often distracted during his studies. Information oversaturation can lead to stress and depression. 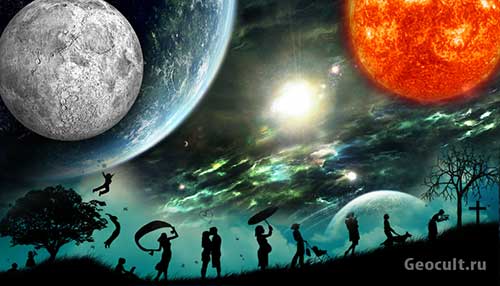 The owner of the tense aspect between Mercury and the Moon is sociable, curious and somewhat fussy. Such people love to interact with others and receive a variety of information from them. True, the subject is sometimes not very picky about the quality of information, and often the news comes to him in a distorted form: in the form of gossip and empty inventions.

A native with this aspect should be more selective with people who claim to be intimate and play the role of friends. Intrusiveness, talkativeness, obsession and negative information from some personalities can deprive the subject of peace and balance.

The speech of the owner of the horoscope can be chaotic and inconsistent, and the presentation of the material can be inconsistent and devoid of logic. And yet, with some training, the native can overcome this drawback, turning a minus into a plus and learning to express his thoughts competently and intelligibly. In this case, the subject will even be able to realize himself in writing, journalistic or teaching activities.

A good reaction and the ability to quickly respond to the requests of others will allow you to become a good consultant, agent, seller or driver.

Opposition of the Moon and Mercury in the male horoscope

This aspect in a man's natal will describe his type of relationship with the opposite sex. The native likes women who are talkative, easy-going and outgoing. True, it is not always easy for him to find a common language with a woman. There can be a lot of empty words and promises, deception and ambiguity between partners.

The tense aspect between the marriage indicator and Mercury will tell about the inconsistency in the sphere of partnership and frequent adverse changes in personal life.

Opposition of the Moon and Mercury in the female horoscope

If there is this aspect in the woman's radix, then this will characterize her as a practical, efficient and erudite nature. She is often confronted with minor troubles at home and at work, and thanks to this, she gains experience in overcoming and improving various situations.

Nervous strain and stress are also frequent occurrences in the life of the owner of a horoscope, but she does not hesitate to speak out her problems with specialists. Having accumulated the necessary information, the woman begins to distribute advice on the preservation and restoration of health to relatives and friends.

Opposition of the Moon and Mercury in the child's horoscope

You need to worry about the nervous system of a child with this aspect, because he is prone to overexcitation and overwork. You should limit its use of electronic devices and do not allow prolonged viewing of the TV. You need to go for walks as often as possible and observe the regime of mental work and rest.

The opposition of the planets of the Moon and Mercury in the personal horoscope indicates that the native will have completely different cognitive interests, and such a dispersion in the intellectual sphere will impede the good assimilation of information and the acquisition of fundamental knowledge.

Most often, the opposition activates the zodiac signs located in the horoscope directly opposite each other. So, for example, the opposition between Mercury in Capricorn and the Moon in Cancer makes the human mind both mathematical and psychological at the same time. When working out this aspect, the subject tries to bring clarity and order the information received intuitively. These are good guidelines for working as a psychologist who uses tests (questionnaires, questionnaires, drawing tests, etc.) while working with clients.