Selena or White Moon is a fictitious point that reflects the light karma accumulated by the people themselves in a past lives or by their ancestors in several generations. The place where the sign of the guardian angel is located will show in which area of ​​life, thanks to the good deeds of the clan, happiness and good luck will be favored without any effort on the part of a person. However, not everything is so simple.

Selena’s cycle is 7 years, and if in the first half of life individuals can collect bonuses and enjoy the fruits of success, then without the support of karma by good deeds, the removal of protection inevitably comes. Holders of the White Moon in the 1st house, associated with personal growth, appearance, character, style of dress and behavior in society, pass exams for loyalty to divine ideals in these areas every seventh year of life, and if the path is chosen correctly, they receive even more gifts from above. To pass the test, it is important to know what tasks the guardian angel of the horoscope sets.

Influence of Selena in the 1st house on character and destiny

The beneficial effect of the White Moon in the 1st sector of the natal chart is so great that it extends to other planets, enhancing their positive qualities and, accordingly, the talents and charm of these individuals, which are already quite magnetic, due to the light sparkling aura reflecting the radiance of Selena. The harmoniously located White Moon in the 1st house presents the wards like a good fairy godmother from birth: 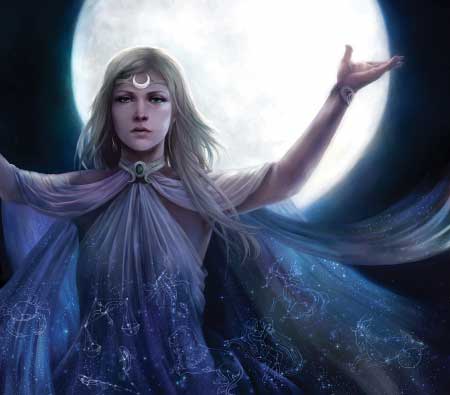 Children with the White Moon in the 1st house are morally clean, with an innate sense of justice and a desire to help, as a rule, they are surrounded by friends, loving relatives, and teachers at school unconsciously imbued them with sympathy, however, these qualities can cause envy, a desire to seduce and spoil them character, especially if the enemies have Lilith (Black Moon) in the 1st and 7th houses.

The guardian angel in the first sector of the horoscope initially blocks any attempts to commit a bad deed. For the time being, these owners of White moon in the first house have no chance to study poorly, use foul language, destroy the body with bad habits, but with negative aspect and weakening of the White Moon’s protection in the 1st house, they can turn into a wolf in sheep’s clothing, using personal charm and invulnerability for selfish purposes. Selena’s wards manifest themselves in the world according to the level of spiritual development:

1. Lower – people are initially perceived as  bright and immaculate angels, unable to commit a bad deed, which they actively use, dumping the blame on outwardly disfunctional or suspicious people. Even a lie in the mouth sounds like the truth. It is difficult for them to resist the temptation to manipulate people who have sympathy for them. Such individuals come out clean from any dirty story, evoking unconscious sympathy, and the closer Lilith is to the zenith of the house at which they do evil, the weaker the influence of Selena.

2. Medium – the unconditional love of others, a thirst to leave a mark on the world and comprehensive support of the Higher Forces in the chosen direction of development. Beauty, artistry, graceful speech. Protection from enemies and envious people. Any slander, character flaws, mistakes go unnoticed by the reputation.

3. The Supreme – the destiny to be a tuning fork of holiness and spiritual beauty in a sinful world, changing it for the better through the manifestation of the light of people’s personality. The ability to awaken good in the soul of a notorious villain, to direct them to spiritual guidelines through creativity.

At any level, the sign of the angel in the first sector of the card portends longevity and success in matters that require organizational skills.

Important aspects of Selena in the 1st house

With favorable connections of the White Moon with the Sun and Moon in the 1st house, these natives appear in an even brighter positive image in front of other people. In the first case, the emphasis will be on bright appearance, leadership qualities and creative talents, in the second – on the beauty of the soul, the ability to heal psychological wounds.

Harmonious configurations with Jupiter give the protection of the highest ranks, with Mercury – the gift to bewitch with words, with Pluto – an extrasensory influence on the crowd, with Venus – an angelically beautiful face, artistic talent. Negative aspects with these planets give the temptation to use the gifts for selfish purposes, inflated conceit, spoiledness. Selena on the Ascendant gives these natives a conscious use of talents for their intended purpose and help others to realize themselves.