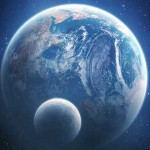 Moon: the second most important star, often the first in women. The moon collects and transforms the energy of other planets, especially the sun. Lady of instincts and emotions. The planet of moods. The symbol of the feminine principle, conception and motherhood – in contrast to Venus as a symbol of sensual love. In the male horoscope, it can mean the first marriage, which inevitably falls apart.

Physical level: hormone production, gastrointestinal tract, lymphatic system, organs of vision, digestion and assimilation of food, behavioral responses. In women it means the right side of the body, and in men it is the left.

The moon is closer to the earth than any other member of the solar system; it revolves around it in a very complex orbit, so its influence is not only great, but also diverse. There are several methods of accounting for this influence. It is necessary to point out that great importance is attached in astrology to the lunar phases.

The phases of the moon are new moon (first quarter), second quarter , full moon (third quarter) and last quarter . Each phase lasts about a week; four phases make up the lunar month. The phases are given in ephemeris and in ordinary calendars… They can also be identified “by eye” by looking at the cosmogram. The conjunction of the Sun and the Moon is a new moon (more precisely, its beginning, the point of transition of the Moon from the last quarter phase to the new moon phase). The left square Sun / Moon is the beginning of the second quarter, the opposition of both luminaries corresponds to the full moon, and the right square is the end of the third and the beginning of the last quarter. The general rule is that the waxing moon (on the way from the new moon to the full moon) is favorable, and the waning one is unfavorable.

Auspicious Moon (in home, in elevation, with good aspects) means the predominance of spiritual interests over material interests, friendliness, sociability, love of home and maternal instinct.

Unfavorable Moon gives changeable character, inconsistency, laziness and insecurity. In addition, it can cause diseases of the right eye in women and the left eye in men, the left side of the body, stomach and chest. An important role is played by the unfavorable Moon in the occurrence of nervous and mental diseases: any, even its favorable aspects with Mercury and Uranus, make the astrologer suspect that the horoscoped person has at least a shattered nervous system. The conjunction of Saturn with the Moon, especially the right one, can also mean serious illness or other fatal circumstances of life.

A favorable period for birth and, in general, for any undertakings is considered to be the growing moon (1-15 lunar day). Russian astrologer V. Zapryagaev in particular, he pointed out: “Before carrying out a surgical operation, pay attention to the position of the Moon and Mars: the Moon should not occupy the sign that corresponds to the diseased part of the body, and Mars should not throw its hostile ray on it”.

However, people born on the waning moon, although they have an increased incidence and less luck, but this is partly offset by the fact that they can be more lucky during the period when the moon is waning.

Of the numbers, the Moon corresponds to two and seven. Of the days of the week – Monday:  this correspondence is found in both the Germanic and the Romance languages.

The color of the moon is considered white (silver). Of metals, silver corresponds to it. From stones – quartz, pearls, coral. From plants – palms and various types of lilies, from animals – frog, owl and cat.