The conjunction of the Moon and Mars in a horoscope is an astrological aspect that requires special attention. The moon is responsible for the basic human needs for safety, nutrition, and psychological comfort. This aspect with the malevolent planet Mars adversely affects the Moon. Mars is associated with the manifestation of activity, aggression and struggle. The conjunction of the Moon with Mars makes the emotional state of a person unstable, and family and everyday circumstances unfavorable.

The conjunction of the Moon and Mars in a person's birth chart suggests that he has such character traits as impulsiveness, aggressiveness, recklessness and impetuosity. The surrounding people experience the native's irritability. He may be suddenly pissed off by the unpleasant act of a person next to him, an inadvertently spoken word, or the feeling that his personal space is being encroached upon. 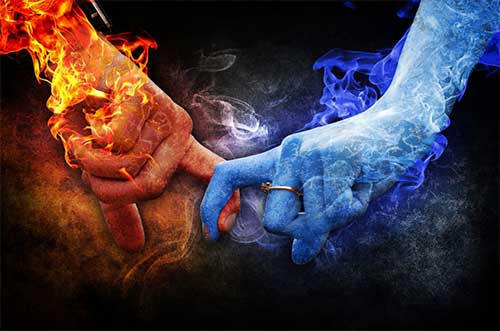 Scandalous behavior, rude attitude towards others, raising noise and tantrums are the ways the native tries to protect himself from negative environmental factors. It is about the owners of the tense aspect between Mars and the Moon that they say that an attack is the best way of self-defense. Feeling bad, the native hurts emotionally and others.

The owner of the aspect often takes risks and therefore finds himself in dangerous situations. The subject should take good care of his health (protect his eyesight, beware of burns, pay attention to the condition of the skin, digestive system), and also take measures to avoid accidents both at home and at work.

If the conjunction of the Sun and Mars is related to the field of finance, the field of work and career, then the owner of the horoscope can realize himself in any security and rescue activity. An entity may have income related to property, repair and plumbing work.

The conjunction of the Moon and Mars in the male horoscope

Moon and Mars, united by an aspect, indicate that the topic of relationships is extremely important for the owner of the horoscope. Since the Moon symbolizes a woman in the male horoscope, her aspect with Mars will indicate the preference of the native for the brave, decisive, proactive, enterprising and athletic of the fair sex.

Since connection is a stressful aspect, a man has to face problems in his personal life. The reason for most of the difficulties is a difficult relationship with an overly energetic and strong-willed mother, who is used to dominating the family.

The conjunction of the Moon and Mars in the female horoscope

Mars and its aspect with the Moon in a woman's birth chart will characterize the type of men who will be attracted to her. As partners, she will choose people who are cautious, economic, thrifty, who know how to protect their home and family.

In a relationship, women with this aspect will demonstrate sexual liberation and show high sensitivity.

The conjunction of the Moon and Mars in the child's horoscope

Children whose horoscope contains this astrological constellation are very vulnerable and sensitive. Children react violently to any discomfort they feel with noise, screams and tears. A child with this aspect needs increased attention and care. It is necessary not only to ensure that the baby is safe, but also to gradually teach him to take care of his self-preservation.

In kindergarten and at school, it will be useful for a child to attend physical education classes, study martial arts and methods of self-defense. Parents need to instill in the child courage, determination, an active desire to help others and protect them.