Trigon (Trine) Moon – Mars is a favorable aspect, and even if the evil star Mars participates in the configuration , this does not negate its positive influence on the life and formation of the native’s personality.

Trine of the Moon and Mars empowers a person and allows him to see broad perspectives in his life and work. The moon , which is responsible for the psychological state of man and his inner world, and the planet-aggressor Mars are alien by nature. But united by the constructive aspect, these luminaries contribute to the fact that the native will eventually learn to create safe and comfortable conditions for himself. 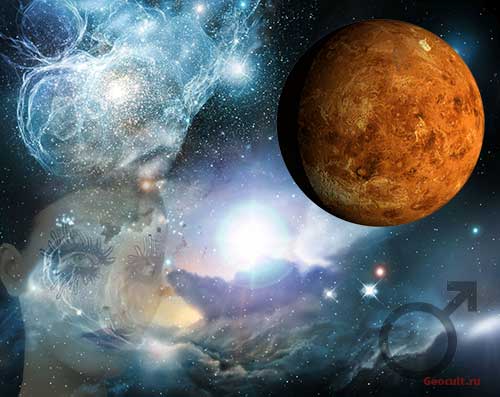 The owner of the aspect attaches great importance to the preservation of their vitality and health. He knows how to repel the attacks of others and in any circumstances creates favorable conditions for life. People around him consider the native energetic, courageous, resourceful and dexterous.

Good luck and success come to such people for a reason. They never stop fighting and always get what they want. The greatest desire of the owner of the aspect of the trigon of the Moon and Mars is the acquisition of personal space, free from other people’s encroachments. In their own homes, they know how to establish and maintain order, as they are practical, economic and responsible people.

The kind aspect between the significator of marriage, the Moon and Mars in a man’s natal chart will indicate that he is doing well with women. The native has masculine attractiveness. He is charming, initiative and sexy. The owner of the aspect knows how to find the right approach to a woman. He knows how to look after and win the hearts of the fair sex.

Best of all, a relationship will develop with a business, practical, enterprising woman who loves sports and knows how to keep what she has acquired.

The harmonious aspect of the trine between the significator of marriage Mars and the Moon in a woman’s birth chart will indicate that she knows how to build an even and constructive relationship with the opposite sex.

Most of all, the owner of the horoscope will appreciate in a man such qualities as practicality, homeliness, thriftiness, as well as the ability to protect the family.

Trigon of the Moon and Mars in the child’s horoscope

This aspect will indicate to parents that special attention should be paid to the physical development of the child.

Physical education, outdoor games, participation in contests and competitions will give such children self-confidence and teach them how to win, improve their health and tune in to future achievements in life.

Moon and Mars in different signs of the zodiac

Trigon in most cases connects the planets that are in the signs of the same element. The aspect as if emphasizes the unity of signs and their common qualities.

So, for example, the Moon and Mars in the signs of Air will tell about the nature of an active, mobile, sociable and at the same time intellectually gifted. Such people do not like to sit still. Mental, research or mediation activities are best suited for them. Work may involve traveling, negotiating and consulting.

If the luminaries are located in the signs of Fire, then such a person will strive to conquer new territories and frontiers in any spheres of life. The native’s activities will be widespread and, as a rule, other people will be involved in it.

If Mars and the Moon of the owner of the horoscope are in earth signs, then he makes significant efforts to strengthen his position at work, achieve material wealth and create a comfortable and solid atmosphere at home.

The location of the planets in water signs will indicate some secrecy of the native. He tends to save his strength, material and energy resources. The subject is able to create a calm, comfortable and safe environment on its territory.