Trigon (Trine) is a harmonious aspect that reveals rich opportunities in life to the owner of the horoscope. If the configuration is formed by the planets of knowledge Mercury and Jupiter , then the strengths of the native are intelligence, rich imagination, the ability to learn and conduct all kinds of research.

Mercury is responsible for receiving and processing information, and Jupiter symbolizes the wealth of knowledge and everyday experience that the native not only accumulates in himself, but also seeks to transmit to others.

The owner of the good aspect between Jupiter and Mercury is able to both analyze the information received, and combine the data into global concepts. He does not get hung up on only small details, but knows how to think on a large scale, at the level of abstractions. 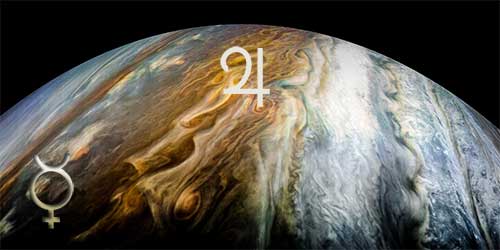 Aspect and its influence on personality

A person whose birth chart contains the aspect in question demonstrates to those around him a great erudition, curiosity and erudition. The native is a versatile person, and there are few areas of knowledge that his lively and deep mind does not penetrate. He loves to travel, meet interesting people and learn new cultures.

The owner of the aspect attaches great importance to spiritual self-improvement. He tries to be kind, humane, decent and merciful. The native's interests include philosophy, religion and literature. His wise thoughts and parting words are ready for all occasions, and he is ready to share them with anyone who is in trouble and needs his help and advice.

Another positive quality of the owner of the aspect is his talent as a storyteller. He knows how to narrate his experiences in a very exciting way. A good imagination and a rich vocabulary help such people create real literary masterpieces. Listeners and readers admire the vividness of the images, accurate and colorful descriptions and an interesting plot.

If the trine of Mercury and Jupiter is related to financial and business houses, then the native can realize himself as a writer, columnist, commentator, blogger, copywriter, journalist.

The range of interests of the owner of the horoscope may also include sports, economics, politics, law, geography, linguistics (foreign languages).

Trigon of Mercury and Jupiter in the child's horoscope

If this aspect is present in the child's natal chart, then we can conclude about his curiosity and love of reading. Of particular interest are a variety of adventures, stories about distant countries and unfamiliar cultures. The kid should be introduced to the fairy tales of foreign writers, focusing his attention on the country in which the action takes place and in what language the heroes of the works actually speak. This will awaken the interest of the little reader to the knowledge of the world and the study of foreign languages.

It is important that the child has the opportunity not only to read a lot, but also to travel. The horizons of such children will expand significantly if they experience exciting events abroad and are able to communicate independently with representatives of other cultures.

Planets in some zodiac signs

Trigon unites the influence of the zodiac signs belonging to the same element. The owner of the good aspect between Mercury and Jupiter collects valuable information in certain areas of life. The signs in which the planets in question fall will tell about the profile that is most interesting to the native, and in which he feels the most confidence.

For example, if Mercury is located in the sign of Aquarius, and Jupiter is in the sign of Libra, then a person is attracted by the humanities, any research and social activity, as well as the field of art. The native is charming, friendly, diplomatic and skillfully communicates with people of various backgrounds and social levels.