Jupiter is the main benefactor of the horoscope, multiplying success and improving affairs that fall into the zone of influence. Astrologers consider it to be the planet of happiness, good luck and wealth. Being in the Aries natal chart , it gives the world bright, incredibly interesting personalities. People with such planet are born to become leaders, whose seething energy, creativity, combined with generosity and idealism, are called upon to progressively change the surrounding space.

Luxury for them is an indispensable attribute that emphasizes a high position, a theatrical decoration in a game called life, but if necessary, the carrier of Jupiter in Aries steadfastly endures military field conditions, not noticing difficulties. The influence on the ward depends on the spiritual development and elaboration of the key qualities of the planet, because of which the native can be both a fiery reformer and a ruthless destroyer, but in both cases on horseback and with a scepter.

The influence of Jupiter in Aries on fate and character

Location in the first decade of Aries enhances ambition, energy and striving for feats, prompting the native to develop tirelessly, conquer peaks, challenge evil and injustice. At the end of the sign, the planet includes spiritual and philosophical quests, pushing dreams of glory to the background.

Jupiter ennobles Aries’ restless desire to stand out, gives spiritual meaning to the fiery struggle. It is about protecting the weak and restoring justice. People with Jupiter in the sign of Aries often interfere in other people’s affairs with good intentions, considering themselves competent in all spheres of life. Huge self-esteem, with the good aspects, is backed up by real achievements, and with the bad ones, the fruits of the narcissistic imagination. To maintain a balance between healthy ambition and empty vanity, they need to know the main lines of influence of Jupiter in Aries on fate:

The owners of Jupiter in Aries achieve success due to the confidence in the uniqueness of their own talents and the greatness of their destiny, but these same feelings, with low intelligence, lead to pompous philistinism and dictatorship. 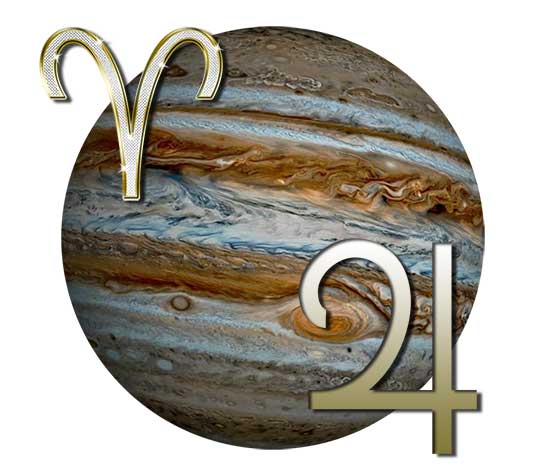 Jupiter in Aries makes a man incredibly attractive and charismatic, because he is always confident in his personal rightness and strength, the radiance of a constant glow of an internal reserve of energy emanates from him, and falling in love, the native is ready for feats and madness for the sake of the chosen one.

Romance, generosity, courage help him win the most unapproachable ladies, but impulsiveness and cheerfulness rarely border on loyalty. The interest of the owner of Jupiter in Aries must be kept up with a constant change of impressions, events, adventures, because boredom and ordinariness abhor the consciousness of the protagonist of the epic. With the weak position of the planet, he requires blind obedience and exploits the sympathy of relatives and colleagues.

A girl with Jupiter in Aries is constantly busy with personal growth, which is greatly helped by business trips, travel and communication with famous and high-profile personalities. Brave, sincere and generous, she primarily values ​​the intelligence of the interlocutor and strives for an alliance with a powerful man who pursues global goals with a good context.

Representatives of the stronger sex often perceive her as a friend or competitor, since she constantly proves her superiority in disputes and competitions of a various nature. Despite her cordiality and compassion, victory in any field is the main joy for her, which even family happiness cannot replace. The husband needs to be ready for the endless tug of the palm in the topic of personal achievements, because a woman with Jupiter in Aries is bored without this.

The compatibility of the benefactor planet with a partner similar in the horoscope includes successful joint work, inspiration and happiness when discussing plans. The native will be friendly with people whose Jupiter is in fire and air signs, and there are practically no points of intersection with earth and water. The planet is being worked out by service in leadership positions, social activities useful to people.

The harmonious aspect with Mars, the ruler of Aries, enhances courage and ambition, encouraging striving for new victories, overcoming even seemingly impossible obstacles, and endowing with physically tangible sexuality, especially in the presence of configurations with Pluto, due to which a person can become like a beloved ruler of the nation and the evil destroyer of the country.

The negative aspect of Jupiter – Mars makes such individuals egoists, putting their interests and needs above others. If this is compounded by a tense relationship with Saturn, then tyranny and conservatism will crush the positive qualities, if there is no positive support for Jupiter by Venus and Neptune in strong positions.

People with Jupiter in Aries are enthusiastic, assertive, energetic, and filled with many ideas: how to grow, start, promote or expand the ideas that fill their heads. They are overconfident and can be very persuasive in getting people to agree with their plans and ideas. Such people enjoy dealing with prospects where they can show their leadership qualities.

Such individuals must learn to be patient and think about possible actions before taking them. Their habit of promising more than they can fulfill, it is advisable to also reconsider. They also need to become more tolerant of other people’s ideas and points of view. They have the ability to sell things, ideas, wealth, and philosophies. Over-optimism, self-conceit, self-centeredness, false pride and bigotry can be their biggest flaws.