A benefactor planet, bringing good luck and prosperity to the area of ​​its influence, can also expand and multiply base passions and instincts, which is why it is so important to know the peculiarities of Jupiter’s influence on fate and develop its highest qualities, depending on the location. Being in Taurus, in the kingdom of Venus, people form incredible monetary luck, a love of comfort, imperiousness in a gallant expression, when charm and gentleness of speech induce obedience faster than harsh orders.

Harmony in communication with bosses and partners, social environment, financial affairs is important for such individuals. From Venus, the owners of Jupiter in Taurus received an intuitive sense of proportion: they know when to stop, therefore they rarely participate in conflicts and do not abuse food and drinks, with the exception of the badly affected planet of love in the horoscope and a low intellectual level of development, when the increase in achievements is replaced by extra pounds and debts.

The influence of Jupiter in Taurus on fate and character

People with such Jupiter are unshakably confident in their own righteousness, but before deciding on a civic position and personal views on life, art, philosophy, they read a lot, analyze, test various ideas in practice.

The process of studying topics takes a long time, since Taurus add slowness to Jupiter, but having decided on priorities, they become adamant in following the chosen authorities, turning into conservative reformers who change the world to their own standards (V.I.Lenin, T. Roosevelt).

The owners of Jupiter in Taurus rarely take risks, and the love of luxury and comfort prompts from an early age to delve into the intricacies of capital investment and obtaining a monetary profession. Such people will never be left without a livelihood. At the same time, they are not at all insensitive businessmen, because the harmonious planet of luck endows them with a wide range of properties:

The struck Jupiter in Taurus gives hot temper and an expansion of the spectrum of bad habits: gluttony, depravity, excess of authority for the sake of self-interest, stinginess, and with a negative aspect with Neptune, alcoholism is likely. 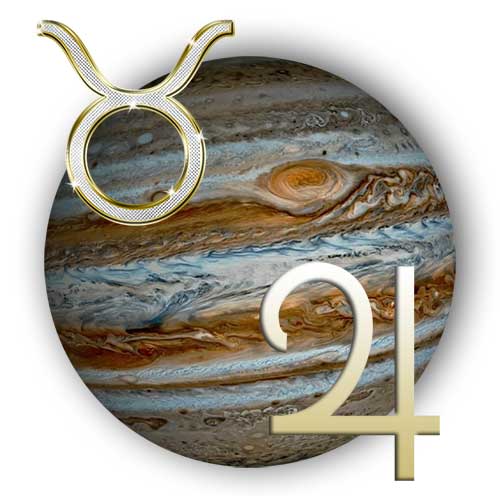 The carrier of Jupiter in Taurus loves himself more than others and rarely loses his head in a fit of passion. At least he will not give access to the accounts and he will register the property in his own name, even being in love. He prefers that the woman achieve it on her own, giving time to think about options for family life and a comparative analysis of female fans.

Generous, albeit prudent, the native will be in a harmonious position of Jupiter and Venus, and tense ties with Saturn and Mars can create a miser, allowing spending only in relation to himself. The owner of Jupiter in Taurus does not like active sports, preferring to listen to music while lying on a sun lounger by the sea or slowly playing golf. Temperament, courage in overcoming obstacles and willpower, he shows only at work, holding a leadership position.

A woman with Jupiter in Taurus cannot imagine herself without luxurious things, a beautiful home and jewelry. She appreciates and understands art, especially music, and is naturally gifted with artistry and vivid vocal abilities. A resounding voice and authority will come in handy for her in the position of the boss, and in the family she will be the main one, unless she marries the owner of Jupiter in Aries. Most often, wealth and career growth comes to her through a profitable marriage or the help of high-ranking patrons in love with her sensual temperament.

Friendship, common interests and mutually beneficial, pleasant partnership await the native in communicating with the wards of Jupiter in earth and water signs, understanding each other with air signs is worse, and the element of fire should be avoided. With negative aspects with Venus, the ruler of Taurus, and Neptune, complexes arise on the topic of appearance, a distorted idea of ​​religion, lack of confidence in love and support of loved ones. Excessive eating, wastefulness and infantilism appear.

Harmonious ties with Venus and the Moon help to reveal the best qualities of sex – courtesy and courtesy in men, femininity and caring in women, with an active manifestation of leadership and creativity.

The development and strengthening of Jupiter in Taurus goes through charity, physical labor on earth, and floriculture.

The main desire of Taurus is to expand the world around them with practical, tangible and material things, while the rewards they expect from their efforts should also be of a material nature. A simple “thank you” as a gratitude is not as pleasant for them as if it was some kind of trifle in the form of something concrete that they can hold and consider. Taurus are generous and freely share what they have, but only if there is a reason for it.

People born with Jupiter under the sign of Taurus are naturally inclined to be a little extravagant and indulge their own weaknesses, as well as at the same time be stubborn in their philosophical and religious beliefs, constantly needing proof of something before believing it. In Taurus, there is a fear of illness and pain. Money and material goods will come to such people, but they must use them wisely, otherwise these goods will get them into trouble. A love of sugary and high-carbohydrate foods can make people overweight, so they need to control their taste preferences.