The planet of luck, wealth and success in a global sense, Jupiter , being in Leo, enhances the passion of the children of the Sun for luxury, glory, power. People with such Jupiter long to become famous and influential. They choose the path to the goal according to the strong or weak position of the planet: through the disclosure of creative talents and sincere friendship with authoritative personalities, or take the path of pride, self-aggrandizement, and the use of other people’s abilities.

The owners of Jupiter in Leo love holidays, magnificent celebrations, where they are main stars. In the process of achieving success, it is at bright, large-scale events that these natives have a lucky chance to declare themselves and fly to the top. This most often happens through meeting influential people. The struck Jupiter suppresses the creative energy of its wards, directing it to the momentary fulfillment of desires. The voice of the ego encourages such individuals to destroy and take away other people’s success in order to satisfy vanity.

The impact of Jupiter in Leo on fate

The fire element of Leo manifests itself through the emotions of the heart chakra. Authorities are tested by love. Having chosen the path and life guidelines, the spiritually and intellectually developed natives test them with intuition, realizing at the level of feelings whether they will lead to happiness. Therefore, most often they choose examples worthy of imitation and lofty goals, the implementation of which delights others.
The negatively aspected Jupiter in Leo, on the contrary, sees only the outer sheen of glory and luxury, and is ready to run towards them over the heads of rivals. The karmic task is to overcome the partiality of judgments, when what is considered correct is what they just like.

Solar Jupiterians have a pronounced set of qualities and astrological properties:

To overcome megalomania, the native should maintain a balance between enjoying worldly pleasures and spiritual development. 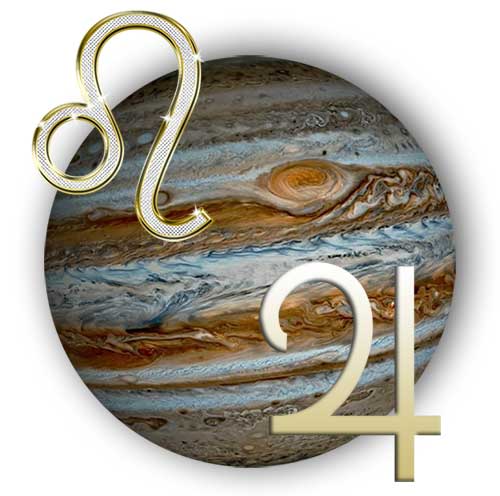 Jupiter in Leo for a man and a woman

The Sun Jupiterian positions himself as a king, whether there is a reason for this or not. With a strong Mars, he will do it aggressively, and with the harmonious position of the two planets, he will be able to play a trick on the passion for applause and admiration. It’s easy to win the heart of Jupiter in Leo – you have to admire his persona and success. There are never too many compliments. In response, he will thank him with generosity, romantic surprises and even let him sit on the throne next to him.

This man strives for marriage and plans in advance a pompous wedding ceremony with many guests. He prefers to choose his wife among status and wealthy girls. The Carrier of Jupiter in Leo will be a faithful husband, since he attaches importance to vows, but not a stay-at-home. Stormy social life, parties and social events are an indispensable recipe for his personal happiness.

The Solar Jupiterian lady is energetic, cheerful and confident in the right to fame, power and the decision of the fate of other people. The ambitious lioness’s goal is to become an authoritative personality, whose value is confirmed by awards and public recognition. As a creator and organizer, she easily copes with the task, along the way winning the respect of her enemies. It is not surprising that after some time they will move to the camp of the allies.

The owner of Jupiter in Leo will marry only a rich and influential man who will give her freedom to embody grandiose plans. She will be a wonderful and fair mom, but not a housewife.

For the owners of Jupiter in Leo, it is important to have a strong position of the Sun in the horoscope, to show the highest qualities of their solar sign. Harmonious ties of the planet of luck with the daylight give the world a human star, warming everyone who falls into its aura of optimism, cheerfulness and endless creativity.

In addition, these natives are noble in soul, fair and courageous, know how to grab luck by the tail and use the chance to the maximum. The conjunction of Jupiter with the Sun promises a happy marriage and success in a matter that emotionally affects the owner of the horoscope, especially if there is a harmonious connection with Venus, which also promises wealth and good luck through creativity and love relationships.

The square of Jupiter with the Sun provokes hobbies for dangerous adventures, unhealthy excitement and selfishness, reinforced by an explosive nature and mood swings. A favorable aspect with Mars awakens the energy of a conqueror and fighter against evil, and square with the scarlet planet creates an aggressive fighter and adventurer, prone to profit and waste.

People born with Jupiter in Leo are generally generous, kind, sympathetic and altruistic people. They have organizational and leadership skills. Such people really want to be in a position where trust and responsibility are needed. They don’t like just following someone.

Lions with Jupiter in the natal chart radiate a lot of energy and have good health. They love everything that leads to the spiritual uplift of society. However, they can become  cruel, voluptuous, selfish, boastful people, have a tendency to abuse all sorts of pleasures and lose money in speculation and gambling. Such individuals must value themselves  for their generosity and kind-heartedness, and take special care to control their vices.