The square between Mercury and Neptune manifests itself in two ways. On the one hand, this tense aspect contributes to the emergence of contradictory situations in the native's life that must be overcome. But Neptune is an energy-draining planet, so stress, lethargy, apathy and passivity are something that is not easy to resist.

Mercury is responsible for the intelligence and cognition of humans. The intense interaction of this planet with Neptune, symbolizing everything secret, unknown and spiritual, makes a person very intuitive, receptive and psychological.

Chaos in current affairs, duality, understatement and illusions interfere with a person's life, but if he knows about these problems and tries to solve them, then many unfavorable outcomes of situations can be avoided. 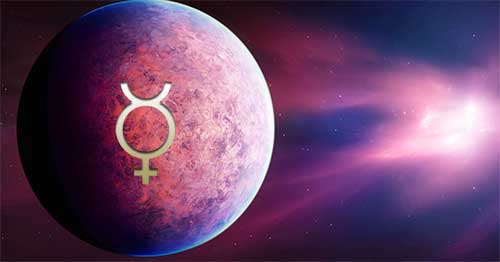 The owner of this aspect may be considered by others to be absent-minded, dreamy and self-absorbed. It is difficult for him to be practical and realistic about the world. Such a person has an excellent imagination, and those images that his rich imagination draws are much more beautiful and attractive than boring, and sometimes harsh reality.

Forgetfulness, unwillingness to concentrate on studies and inability to prioritize business deprive the subject of many successful opportunities in life. It is not easy for such a person to show others his extraordinary intellectual abilities, and he himself does not seek to initiate others into his thoughtful reasoning.

The owner of the aspect understands that not everything in life lends itself to logical comprehension. Imaginative thinking and a psychological mind help him to understand the fine lines of a person's inner world, to read a thought written between the lines, to intuitively find the key to unraveling a complex phenomenon.

In addition to interest in the psychology of a native with this aspect, such areas as religion, medicine, finance, chemistry, biology and linguistics can be attracted. The person also has a literary talent. From under his pen, works of large volumes may come out, in which much attention is paid to the study of human psychology and the riddles of his nature.

The owner of this aspect is often approached, wanting to talk about a sore problem and about the most intimate. The native needs to learn to keep other people's secrets and avoid too subjective judgments.

The square of Mercury and Neptune in the child's natal chart

If there is the astrological aspect in question in the child's birth chart, then there is no need to scold him for poor academic performance, inattention and inaccuracy. Punishing adults will only increase his anxiety and will contribute to the development of neuroses.

A sincere conversation between parents and their child, a soft tone of communication and a gradual clarification of his desires and interests will help to solve many problems in childhood and adolescence. This line of adult behavior will save the child from having to lie or shirk his responsibilities.

The square of Mercury and Neptune in some zodiac signs

The square is an aspect that brings difficulties to the native. But still one cannot make final conclusions without evaluating the properties of the planets that form this aspect.

An interesting case seems to be when the square is formed by strong luminaries. For example, Mercury in Gemini and Neptune in Pisces, if properly worked out, will bring the subject success in literary, psychological, medical and religious activities. Having learned to cope with the excitement and chaos in his own life, the native will acquire the ability to calm down the people who turn to him, instill hope in them, and help them cope with life's difficulties.