The patron planet of intelligence and business acumen, the ability to communicate with different people – Mercury , being in Cancer, enters into a close alliance with its ruler, the Moon , and therefore the mind will follow emotions. The best gift of the messenger of the gods, a good memory, will manifest itself only if the owners od such Mercury in the sign of Cancer are sincerely interested in the topic of study or work, otherwise they will prefer to hover in the clouds, write poetry or novels about mystical adventures.

For the same reason, these owners of Mercury in Cancer remember insults for a long time and their sophisticated mind is able to write a revenge script that will be envied in Hollywood. They often take good and sincere participation for granted, so their good attitude should already be considered a reward, because most often these individuals are dissatisfied with even the closest people who are trying to please them. Getting along with them is not easy, because they need to understand the origin of increased moodiness.

In communicating with the carrier of Mercury in Cancer, it is necessary to take into account the position of the Sun: in Gemini, Leo, it makes such individuals less vulnerable and dependent on the emotional state, but more quarrelsome and demanding. Solar Cancer or Pisces has a hard time coping with mood swings. Intellectual success and friendships are completely dependent on the psychological state.

If there are no special negative factors, the following features are inherent in these natives:

In stress or emotional arousal, the carriers of Mercury in Cancer forget even the elementary foundations of knowledge, do not understand where they are going and what they are doing. Therefore, they need to pay special attention to auto-training and meditation in order to maintain self-confidence. 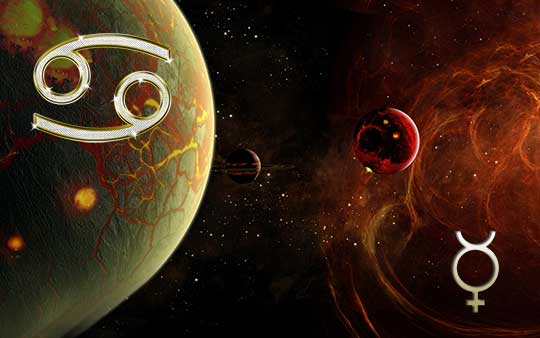 Despite the outward confession of high moral principles, a man with Mercury in Cancer is a typical person of mood, and if it is spoiled, he does not resist the temptation to pour out a tub of anger and unfair accusations on a weaker family member or subordinate. A rich imagination instantly draws a possible scenario of probabilities, according to which the main culprit of the problem is not him, but those around him.

Manipulation of feelings of guilt is a key karmic flaw that poisons communication with the native. He is happy to ridicule other people’s sins, because he sees through the interlocutor, having a good understanding of psychology, and he himself does not accept criticism. People can position him with  respectful attitude if there is a high threshold of patience in front of sarcasm.

A woman with Mercury in Cancer rarely changes the habitual and comfortable beliefs that she has absorbed on an emotional level from parents, teachers, and learned from her favorite books and films. Even when faced with the real state of affairs, she returns to the familiar world of illusions, where she is the unconditional queen and legislator.

It is difficult to get along with her and find a common language, because everything that does not fit into the created system of values ​​is subjected to derisive criticism. In every person, she seeks parental support and approval, making friends with anyone who sincerely gives them. In a calm, confidential atmosphere, she reveals a tender and vulnerable soul hidden under the shell of feigned bravado.

Retrograde and aspects with other planets

People with Mercury in Cancer often becoms writers, actors, satirists, professional critics or sommeliers. The retrograde position of the planet makes it difficult to move up the career ladder and does not allow making friends, if such individuals do not work out deep suspiciousness. They suspect everyone who shows interest in them of wanting to deceive, profit from them or set up.

Due to false prejudices, they armed themselves with the sword of sarcasm, shaving off potential friends. It is necessary to learn to control emotions and control themselves, in which the favorable aspects with Saturn and the Moon will strongly support, helping to stop in time at the limit of the transition of criticism to mockery. Sextile with Neptune and the Moon gives creative abilities in the field of acting and literary skills, with Chiron – the talent of a satirist-humorist, with Venus – an artist.

In people born with Mercury in Cancer , thoughts are associated with memories, feelings, emotions and the past. They tend to cling to memories of things that make them feel secure. Such people are too interested in personal, internal problems, their thinking is more based on feelings, intuition, personal experiences and prejudices, and not on logic and reason. Intellectual abilities and achievements mean little to such people, for lack of feelings. They are  good listeners and are very interested in a person’s feelings and inner world. Besides psychology, they are probably passionate about education, art, poetry, music, or mythology.

People with Mercury in Cancer are shy and reserved when it comes to performing in public, but they can open up great in small, family circles, with people they know and trust well. Perhaps they enjoy keeping a personal journal or writing down thier thoughts and feelings about daily events in their lives. Their mind quickly grasps all knowledge. Such peole have developed good intuition, they are  excellent psychologists, responsive, but their depression can bring them many problems. They may not understand the essence of the problem, because they perceive everything from an emotional point of view. It can be difficult for such Cancers to make any decisions or change their point of view. They need to work on mental control and attention.