The planet that supports the development of intelligence, Mercury , being in the sign of Libra, occupies a seemingly strong position that gives people intuition, a sense of beauty, love for the graceful expression of thoughts and determination in protecting the interests of the unjustly offended. They are  born advocates, passionately defending high ideals.

However, Mercury in Libra is subject not only to the influence of Venus, but also of Chiron, which makes it rush from plus to minus in the heat of the contradictions of its own mind. Under certain circumstances, the individuals can be cold and sincere, sincere companions and arrogant cynics, confusing the interlocutors. Making decisions in their inner court, they hesitate for a long time between “yes” and “no”, and in order to establish a trusting contact with them, people need to understand the foundations of Venus-Chironian thinking.

A pleasant bonus for the owners of Mercury in Libra is eternal youth, manifested in a spirit thirsty for knowledge and new achievements, which energetically rejuvenates the body. These natives are outwardly calm and peaceful, and only a gaze sharpened like a steel blade betrays unbending willpower and innate authority. They do not need sharp corners, conflicts and quarrels. A diplomatic mindset and confidence in their own authority allow them to find the right words to pacify opponents. The qualities characteristic of the carrier of Mercury in Libra are revealed according to the position in the houses and aspects:

The owners of Mercury in Libra are people of beauty and harmony. They hate to be shouted at or nagged at a rude form. Collaboration and learning in a gloomy atmosphere will end in total collapse. It is vital for them to be among like-minded people in the field of government, art, music, design or fashion, where they flourish and show the talent of leadership and creator to the maximum. 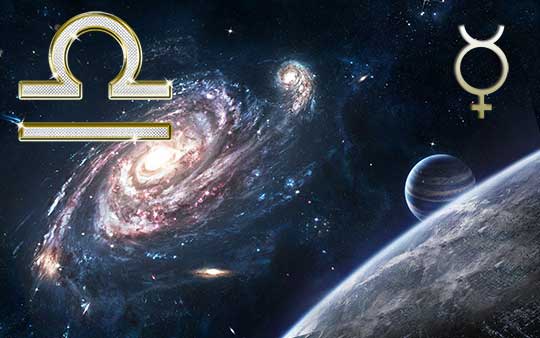 A man with harmonious Mercury in Libra rules the ball with an iron hand in a velvet glove. He is gentle in the form of expressing tough decisions, but adamant, although he is ready to compromise if he is well argued and offered a profitable alternative. The affected planet inclines to deceit, the cause of which is not insidiousness, but the fear of disappointing one of the many acquaintances.

In an effort to please, the weakened Mercury in Libra forces the ward to voice not a sincere point of view, but what the interlocutor wants to hear, or the native deliberately speaks to the enemy, pretending to be an ally, but acts as it suits him. This is especially pronounced in relationships with the fair sex – they should not unconditionally trust the dizzying compliments and confessions of the Venus-Mercurian.

A woman with Mercury in Libra is full of original, interesting ideas, however, half of them do not have time to implement because of the fear of offending  someone from her relatives and colleagues. She is often ashamed of advancing her career path, fearing to make enemies and envious people. Being a born diplomat, she easily settles conflicts and feuds, although she remains emotionally devastated when faced with negativity.

She, like air, needs creativity and communication with highly moral and spiritual people. Despite the ability to convince anyone even of absurd theories, in marriage she adjusts to the man, pushing personal interests into the background.

The owners of Mercury retrograde in Libra react with a delay to the interlocutor’s remarks. The fact is that they carefully choose the right words so as not to offend anyone and provoke an argument. Suspiciousness increases: people repeat the same thing several times, clarifying and supplementing, fearing to be misunderstood.

It would seem that the conversation is over, and the individulas call back or bring up the old topic when they meet, often apologize and ask again whether they offended inadvertently, but whether their words were perceived correctly, which only annoys people. It is necessary to develop confidence in decision-making, close the topic on time, without reflecting on the interlocutor’s reaction, and be more spontaneous.

Favorable aspects with Venus and Chiron strengthen Mercury in Libra, endowing with acting talent, the gift of persuasion and reincarnation, a subtle understanding of art and eloquence. Trine and sextile with Mars and Jupiter remove shyness and fear, help to take a leading position in politics. Opposition or square with Saturn and Neptune aggravate nervous tension, stiffness and indecision.

People born with Mercury in Libra are able to see the problem from all sides, negotiate and seek compromise and reconciliation. They are diplomatic, fair, tactful and socially tactful. Such people can work well with any group of people. They are objective and detached from emotional beliefs, so they can be excellent advisors, mediators, or public relations representative. They insist on justice and seek peace and harmony in all situations. A sense of beauty allows them to work in the arts and culture.

Mercury endows such individulas with a convincing, rational and well-balanced mindset with an artistic sensibility. They are flexible in communication and ready to listen to all sides of the problem. Sometimes this can lead to indecision and hesitation, because it is difficult for them to decide which side has more good reasons. When the mind is working on comparing and analyzing the big picture, they feel great.