The opposition of the Sun and Pluto is a tense aspect that is both a powerful transformative force and the ability to overcome various obstacles in life. The Sun and Pluto are both energizing celestial bodies. Connecting through the tense aspect, they impart great energy, assertiveness and desire to dominate to the native's nature.

People with this constellation often experience internal contradictions. The sun encourages them to create, and Pluto – to transform reality and destroy. The native can achieve success by fighting against injustice and outdated rules in society, mobilizing others to overcome crises and building a new and progressive order on the ruins of the old way. 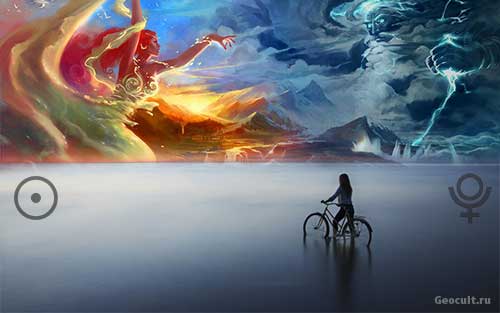 The influence of the aspect on the personality, attitudes and behavior of a person

There is something magnetic in the character of the owner of the opposition between the Sun and Pluto. He draws attention to his person thanks to the ability to lead, direct people to the goal and show them by his example how to successfully resolve various issues. The native can be too demonstrative and ambitious. Despite his shortcomings such as authoritarianism, impulsiveness and selfishness, people still recognize him as commander-in-chief and easily transfer the initiative to him.

A subject with this aspect never hesitates to express his opinion, even if it goes against the generally accepted, with pleasure he commands others and gives out assignments. Such people achieve their goals thanks to willpower, assertiveness, unshakable confidence in their righteousness and irrepressible energy. If they manage to overcome their natural impatience, anger, recklessness and aggressiveness, then they will have fewer problems in their lives.

It is advisable for people with this aspect to choose a job for themselves that will give out their enormous internal energy. It can be any active activity: sports, physical labor, work in the security services, in law enforcement agencies, etc. Sometimes a native with the opposition of the Sun and Pluto is attracted to such fields as chemistry, psychology, physics, forensics. They can realize themselves as entrepreneurs, financiers, politicians and show business workers.

Pluto's tense aspect to the Sun, the significator of marriage in a woman's birth chart, will give her partner rather negative characteristics. She will be attracted to men assertive, rude, domineering and despotic. The decision to marry can be hasty and reckless, as Pluto symbolizes lightning speed, passion and action under the influence of instincts. In this regard, the owner of the horoscope should first carefully weigh the pros and cons, and only then go down the aisle.

On the other hand, the hostess of the horoscope may herself show dictatorial manners in relationships and strive to control her man. The formation of strong relationships can be hampered by her quarrelsome, domineering nature, the habit of hacking from the shoulder, aggressiveness and intransigence.

The opposition of the Sun and Pluto carries a destructive force. The signs of the zodiac that are activated by the planets will indicate the area in which the native finds problems. For example, the opposition formed by the Sun in Libra and Pluto in Aries will make the issues of interaction with the opponent and the ability to defend their personal interests in partnership relevant.

A person with this configuration in the horoscope, working on himself, will be interested in eliminating conflicts, and not in aggravating them. The native must learn to feel that fine line of volitional influence, which cannot be crossed by interacting with others.