Rectangle (Envelope) – jump to a dream across the abyss

The natal chart contains bizarre geometric shapes. They are formed by several aspects coming from 3 or more planets, which are closed in integral images. Such configurations have their own influence on the life of a native, but for a complete analysis it is necessary to take into account the properties of all celestial bodies and stars, houses and the very connections between them.

Paired trigons and sextiles form an astrological quadrangle called the Cart or Envelope, the outlines of which it resembles. It is a symbol of collective good fortune, when, on the wave of popular social trends, a native becomes a leader, thanks to the ability to easily find a way out of a difficult situation. Hidden oppositions will help the talents of the two trigons and sextiles to be realized. If a person develops their strength, then he receives a powerful protective aura as a bonus.

Influence of the Rectangle (Envelope) on fate 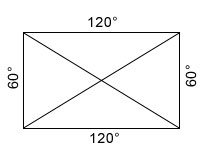 The native’s path to success is like a leap forward movement. The opposition of the planets will show what negative qualities on their lower floor will have to be abandoned in order not to lose more in these areas. Internal tension and dissatisfaction with life are given for the realization of the necessary transition to a new level. The cart pushes the ward onto the path of active search. Sometimes circumstances are especially for this purpose inflated, and failures follow each other. However, the diamonds of opportunity just need to be dug out of this heap of negativity. Feature of Astrological Envelope:

It is extremely important to consolidate the positive result obtained, whether it be financial or creative success, because some chances granted by fate bring with them a lot of temptations, provoking waste, voluptuousness and laziness, when suddenly, feeling the lack of driver control, the “Carriage” flies into hell. Without active actions, the configuration gives luck in business, personal life and protection from viral diseases, but if a person purposefully develops the qualities of the planets and houses affected by it, then the strength of the aspects increases many times over. You will have to be ready to repeat three stages in life: stagnation, the need for a breakthrough, the right choice of the main direction for development and prosperity.

Rectangle (Envelope) in examples from life

If the configuration appeared in the synastry horoscope (compatibility of the union between a man and a woman), you need to prepare for a detailed study of the relationship. This is a sign of a karmic connection, when it is boring together closely and apart. The partnership resembles the fable about the Swan, Cancer and the Pike, when each pulls the blanket over himself, considering the interests of the other as meaningless and unimportant.

The principle of the Cart (Envelope) to harmonize the opposite elements here must be applied in full. As soon as the actions on the planets in opposition go, outside help will immediately join.

For example, the intention to consciously work out the Venus-Pluto relationship in opposition through a family psychologist will attract the best specialist or give a chance to work in a large corporation, satisfying the basic needs of each of the spouses.

An example of a Carriage in a girl’s natal chart: Mars in Aries (sextile with Jupiter and trine to Venus) and Moon in Libra (sextile Venus, trine Jupiter) in opposition. Opportunities for success and happiness will come through the dynamics of lunar deep emotions, creativity and Martian energy, sexuality, sportiness. The choice will have to be made according to sextiles: Venus – quick money, pleasure, luxury, Jupiter – career, study, growth. Harmonious development will go along the trines, subject to the right choice.

From the card of an actress playing strong women with a sword in her hand, restoring justice: the Sun in Gemini in the 11th house, the Moon in close connection with Mars in Aries in the 10th, Neptune in Sagittarius, 5th sector, Pluto in the 3rd house in Libra. Here is the desire to resist domestic violence, parental quarrels and father’s pressure (opposition Mars, Moon, Pluto), but through fiercely defending their position with fists. There is a tendency to self-deception, escape from reality with the help of alcohol and drugs, a sacrificial position in love (opposition Sun-Neptune along the axis 5-11). The work is going on sextiles Sun – Moon – Mars: intelligent planning to achieve goals, limiting outbursts of anger, unbridled sexual pleasures. Trigons immediately turn on and give success in a creative role and a strong position in their social circle.

If the Vehicle includes the higher planets: Neptune, Uranus and Pluto, you will have to work through the collective unconscious, since these are aspects of generations. Perhaps the experience of ancestors will come to the rescue, or joining a political party, a popular literary movement, the use of trends in design and fashion will have a beneficial effect.

In addition to a breakthrough on the external plane, through its own activity and comprehension to consolidate the result, the Cart assumes constant spiritual development in all four planets, otherwise its potential will remain unrealized.

If the chart contains a semi-carriage in the form of a triangle based on opposition, this is also luck and favorable opportunities for trines and sextiles with a driving force through the opposition of planets, but it is important to do astrological calculations in order to find out when it will turn into a carriage during the transit of one of the planets , which will serve as a signal for action and making a fateful decision.