The planet of order Saturn is responsible for hard work, law-abidingness and adherence to the karmic rules of justice. Being in a particular zodiac sign shows where it is vital to exercise discipline, to live up to high principles of honor, so as not to fall under the restrictions of heavenly forces. Saturn in Cancer is weakened by the alien energy of the Moon , which from childhood brings a lot of problems to the native: a pessimistic temperament, cruel parents, illnesses that provoke the rupture of friendly ties and moving.

Lunar Saturnians are called upon to solve generic difficulties, since their worldview is more strongly influenced by the genetics and psyche of the father and mother. Relations with the world in the future are based on family traditions and views, which destroys the native if there were problems in the family. It is necessary to create new thinking, preserving the grains of good, courageously overcoming the longing for childhood and infantilism.

Influence of Saturn in Cancer on fate

Despite hard work and a desire to please others, a person with Saturn in Cancer rarely becomes successful and popular without the support of a strong and confident friend, patron, sponsor. Hesitation in decision-making, doubts about one's own attractiveness, intelligence, talents poison life, contribute to melancholy and pessimism. This is partially offset by the strong Mars, Jupiter and the harmonious Moon in the horoscope, and if they are weak, then few people manage to get out of the swamp of self-pity on their own.

The owners of Saturn in Cancer often grow up in a cold emotional atmosphere, where the younger unquestioningly obey the elders and receive only criticism and shouts, while merits and achievements are devalued. Lack of love has to be compensated for by focusing on the positive moments and idealizing them, which later creates the illusion of a wonderful childhood. The striking features of the lunar Saturnian are as follows:

A native can endow callous relatives with non-existent character traits, imagining that in fact they are loving and kind, they just suffered a lot, and having created their own family, they adopt the manner of such behavior. 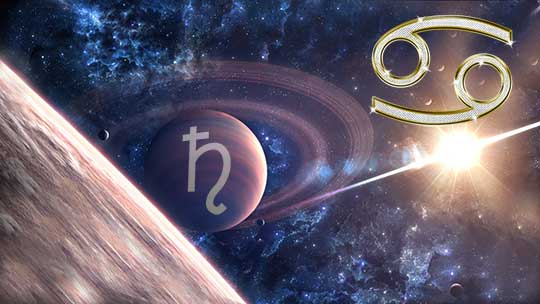 Personal life of Saturn in Cancer

The owners of Saturn in Cancer are gentle and calm. Those around do not know what passions and storms of emotions their interlocutors have to restrain. Behind the external coldness and indifference to both offenders and lovers, they hide vulnerability and fear of being rejected, but this is the only place where discipline is manifested. Disorganization, lack of punctuality, responsibility and independence sometimes turns even the most promising relationships into a chaos of mutual disappointments.

Lunar Saturnians can marry under pressure from a father or mother for the sake of profitable prospects, without feeling love and desire for a partner. It is difficult for them to go against the will of the family, even if a protest against arbitrariness has long been growing in their souls. For the same reasons, they do not allow themselves to enjoy the luxury and beautiful things for which they secretly have a passion. However, funds for a rainy day from the carriers of Saturn in Cancer are always set aside, and their wealth is above average.

They are economical and economic and will not forgive the waste of the accumulated funds on the pleasures of both home and colleagues, therefore they rarely participate in corporate parties, and prefer to relax in the country. To be happy, they need a relaxed and confident partner who will help them show creative talents and throw off the shackles of invented restrictions.

If there are favorable aspects with the Sun and Moon in the horoscope, there is a possibility of a happy relationship with parents and the projection of this into your own marriage, especially with the support of Venus and the position in the 7th and 5th house. This position makes the native obligatory and responsible, but does not give creative spontaneity and lightness of being.

The tense aspects of Saturn with the Moon and Sun endows with the impostor syndrome. It seems to the native that he is not good enough and smart, and this hinders his progress to success. With negative aspects to the planets, there is no understanding of parental ideals. Building collapses and drowning should be feared, as well as obesity and hypertension. Square with Mars threatens with gunshot wound and complicity in a crime.

Jadeite with white blotches will help harmonize Saturn in Cancer . It is ideal for building rapport between different generations, and also gives confidence, determination and eloquence. For lunar Saturnians, it will provide the necessary energy balance of male and female in the soul.

People born with Saturn in Cancer are strong and persistent, worried about their loved ones. You may be moody, scared, and insecure, perhaps because your parents don't like you. These feelings can foster feelings of inadequacy and insecurity in you. You may be too demanding of your children. You need to do something to overcome emotional depression. Your unconscious fear gets hurt from others, and can become an obstacle in communicating with other people.

As a rule, Cancers of Saturn are benevolent people, but have little empathy for others. You may be so absorbed in not being hurt that you don't notice how hurting others. Cancers with Saturn may have a tendency to have an abnormal digestive system. It is advisable not to drink liquids before meals (with the exception of milk, which is a meal). You should watch out for a strong appetite, which can bring trouble to your body. The earth can give you the emotional protection you need and ease your feelings without giving you the opportunity to fall.