The sextile between the Moon and Uranus is a favorable aspect. He points out the positive characteristics of the native and the possibility of good chances and positive changes in his life.

The moon , its position and aspects describe the inner world of a person, as well as his psychological state and well-being. The harmonious interaction of this luminary with Uranus , which is responsible for everything new, unusual and modern, gives a person originality, ingenuity and gives the gift of foresight. 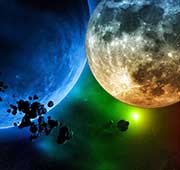 The owner of the aspect does not cling to the old and obsolete. He is inspired by modern ideas and progressive trends in society. Such a person is distinguished by openness of character, humanity, an intuitive mind, giftedness and social activity.

People around him love and appreciate him very much due to his kindness, responsiveness and tolerance. A native is always ready to help if his friend is in trouble. Sometimes he defends other people's interests more actively than his own.

People with this aspect have a tendency to anticipate many events in life. Heightened flair and unexpected insights help to navigate in a difficult situation and make the right decision.

For the owner of the aspect, freedom in personal life is important. He should have his own individual space in which an atmosphere of creative disorder can reign.

Sextile Moon – Uranus in the natal chart of a man

If in the natal chart of a man there is a sextile of the Moon and Uranus, then this indicates his ability to communicate with the fair sex. The native is distinguished by originality and charm. He is romantic, knows how to attract attention and surprise, and therefore usually there are many female friends around him.

Most of all he is impressed by women who are smart, sociable and independent. In a relationship, a man shows loyalty and constancy. The couple's values ​​are sincerity, an incessant exchange of opinions, freedom in creativity and self-development.

Sextile Moon – Uranus in the natal chart of a woman

The kind aspect between the Moon and Uranus will describe the hostess of the horoscope as a good friend, a faithful companion of her partner and a democratic mother of her children. In the house of such a woman there is always a place for friends.

Since the owner of the aspect is loyal to others and is always open to communication, everyone wants to share with her interesting news, innermost thoughts and little joys. Often, people who happen to be nearby help such a woman with advice and provide friendly support in difficult times.

Sextile Moon – Uranus in the natal chart of the child

If there is a harmonious aspect between the Moon and Uranus in the child's horoscope, then this indicates his openness and friendliness. Since the Moon symbolizes the mother in the horoscope, friendly relations are formed with her. The child is interested in communicating with her; during such interaction, he receives a lot of interesting information and shares his own impressions.

The kid, in the card of which the aforementioned constellation is present, does not like to play alone. In the company of relatives and friends, he feels most comfortable. Communication with peers and teamwork accelerates intellectual development.

The interaction of the Moon and Uranus in various elements

The Sextile of the Moon and Uranus most often combines the influence of friendly elements. If the luminaries are located in the signs of Water and Earth, then the native makes many friends at work and skillfully maintains promising acquaintances. He listens to the voice of intuition and takes an original approach when solving issues of property and finance.

If the Moon and Uranus are in the signs of Air and Fire, then a person cannot imagine himself without friends and collective activity. He easily makes contacts, communicates a lot and quickly reacts to changes taking place in society.