Sextile is an aspect of creativity and inspiration. The planets that form the aspect will tell about what abilities the native has, and what he manages to do in life easily and playfully.

Mercury symbolizes human thought. Due to the kind influence of Neptune, the subject has a strong imagination and rich imagination. Since Neptune is responsible not only for creativity, but also for spiritual fulfillment, the owner of the aspect is often interested in issues of religion and philosophy. He is very receptive, attentive to the inner world of others and has good intuition. 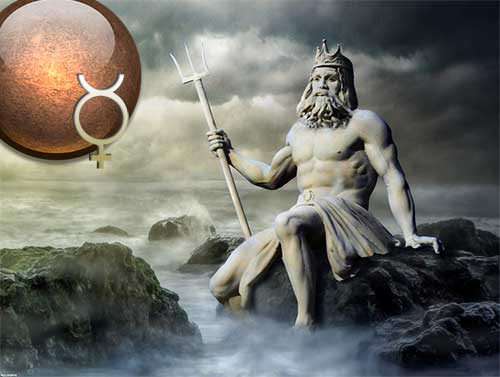 If there is the mentioned configuration in the natal chart , then its owner is distinguished by dreaminess, sophistication of nature, romance and delicacy. Among the interests of such a person can be noted literature, psychology and any humanities (although much also depends on the sign in which Mercury is located).

The person has excellent figurative thinking. He knows that not all words in the text need to be taken literally, and their interaction with each other often carries a hidden meaning and deep emotional load. A native can make a good writer with the ability to fill texts with rich spiritual and psychological content. Words seem to flow from his pen, and in moments of inspiration, the subject can write a literary creation of impressive volumes. It can be a beautiful fairy tale, a thoughtful parable, a fantastic story, or a heartfelt lyrical composition.

The native's speech is soft, pleasant and soothing. He knows how to arrange the interlocutor and set him up for a confidential conversation. Often, people with this aspect are trusted with secrets and the most intimate that is in their souls. A native knows how to keep secrets, knows how to sympathize, calm down and give good advice in a difficult situation.

In addition to everything mentioned, the owner of the horoscope may have an interest in the field of finance and politics. Hobbies may also include foreign languages, biology, chemistry and physics. A native can achieve significant success in the fields of health care, tourism and recreation.

It is necessary to especially note his ability to see and take seriously not only the external world, but also the manifestations of the intangible world. Such people are interested in paranormal phenomena and mysticism. They respect divinatory techniques, everything secret and unknown.

Sextile of Mercury and Neptune in the child's horoscope

To unfamiliar people, such a child may seem too thoughtful, divorced from reality and silent. In fact, he lives a rich inner life and has a lot of interests, but he will not share his observations, thoughts and emotions with everyone.

It will be good if parents seriously engage in the development of the child's imagination and intellectual talents. From an early age, it is worth introducing him to the amazing world of fairytale heroes, confidentially telling about overseas countries, unusual people, animals and adventures that can happen there.

You should also give these children the opportunity to express themselves and speak up. A child with this aspect can easily come up with a fascinating story. Parents need to become grateful listeners and in every possible way encourage the first successes of their crumbs.

Sextile of Mercury and Neptune in some signs of the zodiac

The sextile that unites these planets provides the native with good opportunities in life, but its influence will be more noticeable if Mercury is strong in quality.

For example, the aspect between Mercury in Virgo and Neptune in Scorpio will make a person successful and successful in organizing various services and services. Strong intuition will help the owner of the horoscope to recognize the causes of hidden defects and technical malfunctions. He will see mistakes where no one notices them.