Aspects of the planets

Aspects give an individual color to the energy of the planets and help to read the nuances of their influence on the fate and character of a person. They determine the dynamics of the development of the soul, behavior, reactions to various events. These relationships sometimes change the meaning of both the heavenly bodies themselves and the signs of their stay. Without understanding them, it is impossible to see the pattern of fate in the natal chart , and even more so, to work out sharp corners in order to avoid danger.

There are two types of aspects: harmonious, showing talents and opportunities for wealth and fame, which is a karmic reward, and negative, requiring stabilization and overcoming obstacles. The former give energy for the free manifestation of the world of talents, confidence and good health, the latter attract stressful situations for learning, showing in which areas the energy is blocked. A person who has passed the tests of tense aspects with honor is more successful than the owner of a horoscope with only positive configurations. 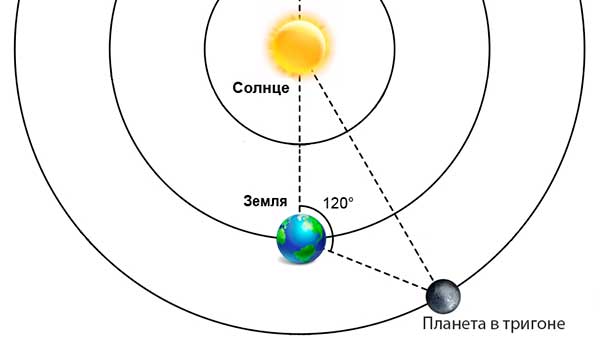 An aspect is an arc that connects one planet (or point) to another, laid out along the ecliptic and measured in degrees. Each aspect has its own name and is indicated by a special icon. The aspects got their names from geometrical figures inscribed in a circle formed by the chords of the corresponding arcs – a hexagon, a square and a triangle.

Since the time of Ptolemy, it has been customary to single out 5 main, major aspects, indicated in the map by a solid line. These include conjunction, trine, sextile, quadrature, and opposition. The abundance of positive connections between the planets makes life easier, but relaxes to a complete rejection of creativity. Negative, black or blue lines stimulate the struggle for happiness, but their dominance over favorable ones, of course, attracts a person to despair and despondency. Harmonious aspects are indicated in green. These are innate talents, beauty, charm, spiritual qualities and luck. Three major whales of good luck in any horoscope:

When the planets stand side by side within 7 degrees and are outlined by a blue or red arc, they reinforce each other's qualities in a positive way, helping to achieve success in the sphere of affairs of the sign and at home. The main gift is the ability to concentrate and work. Compatible planets (for example, Mars and Jupiter ) give instant results, incompatible ones ( Saturn and Venus ) create tension (the arc will be blue) and suggest overcoming difficulties and dizzying victory. This requires activity and complete dedication in improving the qualities of the members of the union.

The 120 ° aspect connects the points of the horoscope in related elements with a line and gives the ease of victories and the joy of self-expression. In ancient times, it was considered difficult, because it gives laziness and egocentrism with a lack of spirituality. This is a sign of happy opportunities and creative talent, but the owner may not reveal the potential, going with the flow. On the event plan, trine harmonizes two spheres of life, for example, with a connection between the 2nd and 7th houses , with marriage and business cooperation, money appears.

The 60 ° aspect is impermanent, but gently helps the energies of the planets “make friends” and attract a stream of happy events and opportunities for creative energy. This is the potential that will need to be hone in practice into a powerful tool for success. Facilitates interaction between homes and their affairs.

Eastern astrologers consider the natal chart, streaked with red lines, a difficult test. Without personal development, talents may not be revealed, or remain unclaimed.

They are marked with red lines, devoid of fatality, denoting not a malicious fate, but a challenge to circumstances and the prospect of development. It is not uncommon for people with many quadratures to achieve more than trine carriers and endure adversity more easily than them.

The 90 ° aspect blocks, frustrates plans, builds obstacles in order to induce creativity and ingenuity. The function of one planet seeks to suppress or destroy another, which requires harmonization and consistency of actions. At a low level of consciousness, it gives blows of fate and accidents, at a high level – talent gained through suffering in trials and hard work on oneself. On the event plane – competition, difficult situations where you need to overcome internal complexes and constraints. Giving up stress throws you back both spiritually and materially.

The opposition of the functions of the planets in the 180 ° aspect, with each variable dominant, gives rise to an internal split of consciousness. It is required to combine opposites into a single system. Creates situations of choice, where there is either cooperation and humility, or breaking up forever.

They are indicated by dotted lines, they act weaker than the major ones and do not affect external circumstances. These are the personal characteristics of the native.

It unites the planets at an angle of 30 ° and turns on periodically, protecting in difficult situations for the displayed nobility, cleanliness, and respect for nature. This is luck in the little things and giving back through the team and small miracles. It manifests itself brightly when connected to the cusp of the sign. Affected semi-sextile distorts the worldview and forces one to go against human and cosmic harmony (black sorcerers and pests).

The aspect of constant action with an angle of 150 ° provokes recurrent situations in order to revise and change them. It is auspicious when there are repeated positive events in relation to the native as a result of the work of good karma. But evil planets attract the return of painful and stressful conditions, until the cardholder learns to abstract from the negative. Repetitions are often associated with a health condition that depends on emotional responses to events.

It is important to remember that a person with a low level of consciousness and spirituality has 1-2 major aspects, but as he improves his awareness, creative and intellectual development, he will be able to conduct an orchestra of planetary interconnections in the horoscope, creating a unique melody of his fate.

An aspect is rarely completely accurate; it is clear that the more precise the aspect, the stronger it works. However, there are times when excessive precision is harmful: “Nothing too much,” said the ancients. If any planet comes closer than 4 ° to the Sun it is called “burned out”. Such a planet “does not work” anymore: all the action of the aspect of its conjunction with the Sun is turned “inward”. Such a person commits actions, shows emotions only in imagination – it rarely comes to their implementation. It is clear that such “stagnation” of intentions and emotions can result in nervous and even physical illness.

If the planet comes even closer to the Sun (conjunction within half a degree, 0 ° 30 ′), the picture changes again: the planet falls “into the heart” of the Sun, on the one hand, making up a single whole with it, so it would be more correct to say that such a person has not the Sun in the horoscope, but a certain new figure – Solntsemars, Solntsem-Mercury, etc .; on the other hand, losing the possibility of any manifestation of its properties, except for an “explosive” one, like a bursting abscess: for example, Solntsemars often gives tumors, and Solntsemircury gives dangerous accidents (by the way, Bulgakovsky Misha Berlioz could have a similar Mercury – otherwise it is difficult to explain why the relatively harmless “Mercury in the second house” brought him under the wheels of a tram).

Aspect can be multiple, that is, express the relationship not only between individual planets, but also between groups of planets. Planets can participate in multiple aspects that do not participate in singular aspects. Aspects can also be double, triple, etc.