White Moon Selena shows the sphere of the horoscope , where the representatives of the genus performed the greatest number of good deeds or experienced suffering, for which there will now be a reward in the form of luck, success and harmony in the directions of the 7th house . However, a lot depends on the spiritual understanding of karmic tasks and the elaboration of problems by correct behavior.

The White Moon in the 7th house symbolizes the light of love, attracting partners for a karmic marriage. As a rule, this is a wonderful relationship, full of mutual understanding, trust and spiritual closeness, but another option is also likely: if women of the clan did not value themselves, remained a victim of a cruel spouse, endured restrictions, then a tyrant and despot is again given as a test in order to show the power of love to themselves, for which they will also need to study I house.

Selena’s influence in the 7th house on fate and marriage

Future partners perceive a person along the axis from 1st to 7th house. The White Moon in the seventh house magnetically attracts kind, spiritually developed, intellectual friends and loved ones, and the owners of such Selena themselves are perceived by those around them as  unearthly creatures, beautiful and bright, which do not in any way facilitate the task of reuniting with suitable life partners.

Most perceive the carrier of Selena in the 7th house as an unattainable ideal, admiring from afar, and with tense aspects and an unmanifest 1st house, situations of generic relationship scenarios are repeated. Here individuals need to look at the horoscopes of parents and grandparents in order to grasp the relationship regarding the position of the White Moon and its influence on family life. For a change for the better, it is important to focus on the benefits brought by the guardian angel of the horoscope to the 7th house:

Children with a White Moon in the 7th house always choose the side of the world. They have no chance of being in bad company, except for Lilith’s position in the 1st or 7th house, as a tempting demon, provoking a desire to taste evil. Teachers feel subconscious sympathy for them, and the Higher Forces protect them from danger and intrigue in the team. 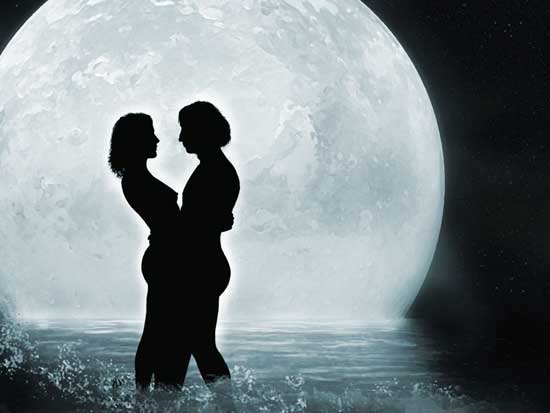 The element of the sign, where the White Moon is located, also suggests which higher qualities of character must be shown in order to harmonize the difficulties in marriage. Fire – creativity, leadership, Water – flexibility, intuition, Earth – selfless service, confidence, Air – giving freedom, ease of communication. The family union promises to be blessed by heaven with good aspects, but much depends on the level of karmic working off of the natives:

1. Inferior – relationship on the principle: together closely, apart boring. Passion fetters people who are completely different in spirit for a lesson in personal freedom and respect. With bad aspects, such natives find themselves in a dependent position and is forced to serve a cruel and intellectually limited partner until they have the courage to defend freedom.

2. Medium – a love marriage with a partner, the character of which will be shown by the nearby planets in the 7th house. Trust, family happiness, longevity and prosperity of the clan. With harmonious ties with the 5th house – brilliant, developed children and creative realization.

3. The Highest – a deep spiritual connection, love that lasts from century to century, thanks to the power of feeling, re-connecting lovers in a new incarnation, serving each other and the highest ideas of the Universe.

At each level, the divine powers keep the native from dangers, hypothetically coming from partnerships of any nature, granting invulnerability from enemies.

Important aspects of Selena in the 7th house with planets

Being an invisible planet, the White Moon ennobles the qualities of the planets with which it enters into aspects, and in the 7th house it shows the traits of the partner, depending on the positive or negative color.

Harmonious ties with the Sun and Jupiter foreshadow marriage with a brilliant and bright satellite occupying a high position in society, with the Moon and Neptune – an alliance with a creative and spiritual person, with Mars – marriage with a strong and noble, with Saturn – older in age, with Mercury – young and enterprising, with Pluto – an influential and wealthy person. Tense aspects portend difficulties and conflicts in family and cooperation.