Uranus in the 9th house

Uranus in the 9th house endows the ward with free thought in the topics of religion, philosophy, studies (at the university level), foreign travel and contacts with foreigners. The native chooses a belief that runs counter to the postulates of his family and country, but most often forms a worldview based on personal intuition and trust in the Higher Reason. Astrology as a way of controlling reality, neurolinguistic programming is a common choice for an adventurous mindset, free from dogmas from youth.

A person loves to travel, experience unusual feelings in new places, learn languages ​​and cultures of other countries. The struck Uranus in the 9th house makes the native a fanatic of his own system, absorbed in the desire to subjugate everyone around him. Such a person usually works in a political or legislative structure, understanding their rules in their own way and sometimes turning into a bounty hunter.

Features of character and worldview

The position of the planet awakens the desire to look at long-existing systems of the world in a new way. With a harmonious strong disposition, this endows the native with talent in the field of politics, philosophy, teaching, and gives quick recognition and fans of his reformism.

New systems of education, upbringing, improvement of legislation are the merit of the Uranian influence. These people actively use technological innovations in education and work: computers, video cameras, teleconferences, and they themselves can study via the Internet, even if they have already received a higher education. The eternal thirst for new knowledge is the driving force of the native, which does not give in to laziness.

However, in case of non-observance of moral principles, it is possible to go into sectarianism, or create a personal totalitarian structure and lead it – Uranus in the 9th house does not recognize any other position, except for leadership, along the way endowing the following character traits:

In the absence of other indicators, Uranus in the 9th house provokes a rupture of the culture familiar to the native and an exit to the highest level, or to anarchism. Prometheus, carrying the highest knowledge, or Balls – depends on spirituality and desired goals. 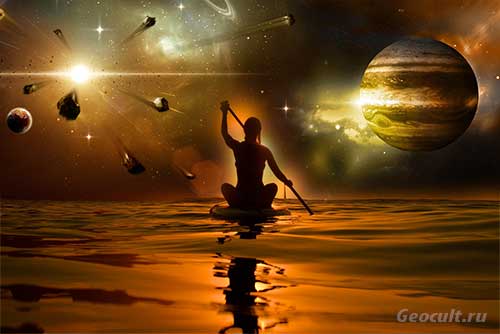 The best way to relieve stress and work through Uranus in the 9th house is to travel to a new country. Sometimes a marriage union with a foreigner and complete assimilation with another culture becomes part of the karmic task. Interaction with society and the introduction of innovative ideas occurs under the influence of the zodiac sign, where the 9th house falls:

1. Aries, Sagittarius, Leo – receiving the double support of Jupiter, symbolically responsible for the ninth segment, the native is able to achieve success instantly, whether it be a revolution or the invention of a perpetual motion machine. The gift of the fiery element is to charge others with reformist ideas, which is proved by the example of Mahatma Gandhi and Martin Luther.

2. Gemini, Libra, Aquarius – the strong position of the planet gives the world the most talented scientists, whose inventions bring the planet to a new level of development. These are generators of new, incredibly bold, ideas and writers ahead of their time on the pages of books.

3. Taurus, Virgo, Capricorn – those people who materialize the fantastic ideas of the air element into well-coordinated structures and reform the outdated state system, inspired by dreams. These are chemists, financiers, directors.

4. Cancer, Pisces, Scorpio – since childhood there is a craving for emigration, realization away from their homeland in new decorations, while they are anxious and suspicious. It seems to them that somewhere there is a better world where you can shine and succeed, not noticing in search of the ideal real opportunities for growth. To work out the problem, you need to engage in creativity.

The negative aspects affecting Uranus mean dangers of an unforeseen nature that will occur unexpectedly, in travel and moving to another country. Square and opposition with Mars and Pluto predict fires, natural disasters, electric shock, attack and conflicts, and with Mercury – the inability to graduate from college (most often for ideological reasons), litigation and proceedings.

Any aspect with Venus gives an unexpected move to the place of residence of a loved one, when passion makes a person completely change his way of life, sometimes even quit school. Trine Uranus-Neptune reveals clairvoyance and deep mystical knowledge, a bright creative talent, which will be easier to show abroad, in the maritime powers. The favorable aspect with Jupiter organizes meetings with patrons and teachers who help the native to realize his natural abilities.