The square is a tense aspectual interaction, however, when interpreting this configuration in the natal chart, you need to pay attention to the planets that form it. In this case, the Moon is a neutral star, and Jupiter is a good planet.

The influence of the square of the Moon and Jupiter will give tension and struggle in the native's life, however, situations of overcoming will help develop such positive personality traits as the ability to help, protect and be just.

Influence on the nature and characteristics of a person's personality 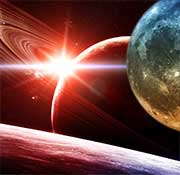 If the natal chart contains a square of the Moon and Jupiter, then the native has a rich imagination and creative talents. Such a person wants to look joyful, optimistic and successful in the eyes of others, but he often overestimates his strength and capabilities.

He can be proud, wayward and careless, and therefore many of his ventures do not end as well as he expected.

The owner of the aspect loves to help others with advice, protects the weak and sometimes even sometimes does charity work. However, while helping others, you should not forget about yourself and your needs. Sometimes you want to save the whole world, but the native should remember that support should only be given to those who really ask for it.

The square of the Moon and Jupiter in natal men

The moon in a man's horoscope indicates his relationship with his mother and the opposite sex. Since Jupiter is a good luminary, women bring happiness to the native and wish for good. Another thing is that their care can sometimes be excessive, and help – unnecessary.

In relationships, there are often disagreements based on ideology and religion. In addition, a man behaves very independently and freedom-loving, which prevents him from building a stable and lasting union. He needs to choose a cultured, educated and cheerful woman as his wife. The search for an ideal life partner in all respects can delay the time of marriage.

The square of the Moon and Jupiter in natal women

If a woman's horoscope has a square between the Moon and Jupiter, then this will tell about her cheerful and enterprising nature. The owner of the aspect loves to travel, expand her horizons and explore the world.

Others sometimes think that such a woman is too ambitious, wayward and has high self-esteem, but in general, people have a good opinion of her. The owner of the horoscope, as a rule, is kind, merciful and does not refuse to help anyone.

If there is this aspect in the child's natal chart, then this may indicate some health problems. He needs to avoid fatty foods and overeating, move as much as possible and exercise.

Kids with this configuration in the horoscope can be capricious and willful, so it can be difficult for them to fit into a new team (in kindergarten or school). Therefore, they need to be taught in advance to the rules established in a particular institution. This will avoid many problems in communicating with peers, educators and teachers.

Moon and Jupiter in different signs of the zodiac

Square is a tense aspect, but if one of the planets that make it up is strong in quality, then such an astrological constellation will still bring success to the native. Especially valuable is the essentially strong Moon, since it is responsible for the health of the owner of the horoscope and his well-being.

An example is the square between the Moon in Cancer and Jupiter in Aries. Such a person may at times encounter unfavorable coincidences of circumstances (for example, on trips and in studies), but any difficulties are overcome thanks to the great vitality and natural optimism of the subject.

The owner of the aspect takes care of his health and attracts professional doctors who have information about the most modern and progressive methods of treatment to restore it.