The red planet, named after the Roman god of war, is often perceived as danger and destruction at its location in the horoscope. This is possible with a negative aspect and a weak position. However, a harmonious Mars also shows the potential for courage, will, stamina and ability to compete, and the sign of finding is a source of vitality and energy for the implementation of plans.

In the female horoscope, the red planet additionally indicates the desired and exciting image of a man. Mars in Aries in his kingdom, strong and violent, brutal and unrestrainedly sexy. Pure martial energy will be directed towards protection and creation or towards violence and destruction, depending on the level of spiritual development of the native.

The total influence of the planet

The owners of Mars in Aries are harsh and straightforward, which borders on rudeness in the perception of others. In fact, they act under the influence of an impulse in a burning desire for immediate results and do not waste time on sentimentality. This approach brings success in business, but not in love and intimate relationships.

Carriers of Mars in Aries need to learn to curb animal instincts with a taste of violence, selfishness and the desire to rule at any cost. Natural-born leaders are attracted by their bright charisma, fearlessness in the face of obstacles and iron willpower, but at a low level of development they become dictators and tyrants, and under aggravating circumstances – criminals. For a safe and pleasant interaction with them, people need to know the features of the influence of Mars in Aries on the character and behavior of such individuals:

The karmic task of Mars in Aries is to direct the volcanic lava of energy towards creation, developing empathy and compassion. Work with fire, metal, technology is favorable. Children with such a position of the planet need outdoor games in the air to relieve aggression by running, shouting and competing. To be successful in school, they will need to develop perseverance and attentiveness. 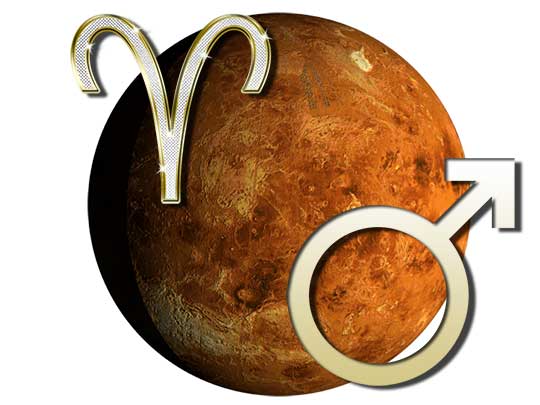 The only authority of a man with Mars in Aries is himself. An overbearing, assertive leader cannot stand people of a fine mental organization, and in personal relationships he seeks to end the bouquet-candy romance as soon as possible and move on to the physical side of the matter. If intimacy does not happen on the third date, he will most likely switch to a more approachable and determined woman.

With a long union, it is necessary to constantly maintain his sexual interest with external attractiveness and even eccentric actions, because the bearer of Mars in Aries loves with his eyes, and the intensity of interest in a girl is measured by the level of adrenaline. An athletic, sexy and independent Venus in Aries, Aquarius and Sagittarius will suit him.

Active, inquisitive, inclined to experiments in the intimate sphere and domination in the workplace, the owner of Mars in Aries looks like a bright and sexy woman, but the main character traits are masculine: straightforward, harsh, assertive to impudence and fearless to recklessness. She is excited about the victory over the stronger sex, both in profession and sports, and in love.

She is indifferent to romance, preferring to conquer, inflame and conquer, rarely satisfied with a relationship with one man, unless he is a leader of the highest category, with whom she will satisfy ambitions and bodily passions. A satellite with Mars in Leo, Sagittarius or Aries is suitable for her.

The warlike planet is the ruler of the constellation Aries, so the force of influence on the native will depend on aspects with other planets. Harmonious ones balance and reduce the degree of inner tension, however, relations with the Sun increase egocentrism and lust for power with an undoubted great mission and talent. Positive connections with the Moon harmonize the emotional state, give the ability to control oneself, respect a partner and show sensitivity and understanding, and with Mercury, they endow them with wit and quick thinking.

Negative aspects with Saturn and Uranus threaten with traumatic and dangerous situations. People born under such position are so addicted to extreme games that they do not feel the approach of a threat, especially if Aries falls on the 1st and 8th houses. Tense aspects with Pluto foreshadow the danger from transport.

People with Mars in Aries are aggressive, adventurous, adventurous and always looking for new projects and prospects. They hate restrictions and do not like being told what to do and how to do it. They want to lead, not catch up. They can be headstrong, impulsive and impatient at times.

Waiting is not about them. Such people rush to get what they want and don’t take no for an answer. Aries Mars love competition and everything that allows them to test themselves or prove something to themselves. Cooperation is not their forte and they can be very self-willed, self-centered and sometimes cruel – the principle “I am the first” is very strong in them.

These Aries are self-reliant and hate to depend on someone or rely on others. They need to be themselves and do things their own way, even if that might not be the best option. One of their talents is making quick progress in the early stages. If initial success doesn’t come quickly, they might get bored with this project and move on to the next. Maintenance is the weak side of the Martian Aries.

Long-term efforts are not as attractive to them as quick, short-term activities that can be quickly finished and started elsewhere. Energy and enthusiasm are their strong points. Self-control is very important for Aries with Mars, it will not lead to burnout. Such individuals need physical activity and keeping fit. Due to haste, such Aries can be prone to accidents. They need to learn to stick with the project to completion, before darting off to a new endeavor. It would also not hurt to learn how to control their temperament and impulsivity.