The red planet with the name of the god of war is responsible for aggressiveness and assertiveness, the ability to assert itself and repel the attacks of enemies, to protect yourself and loved ones. The difficult and vulnerable position of Mars in Pisces appears in the horoscope as a sign of the karma of many years of humiliation and fear of opposing enemies, or it is required to develop non-resistance to evil by violence, healing the hearts of enemies with love.

Militant qualities are at zero here. Compassion, the desire to care and help, turn the other cheek and forgive over and over again is a good thing, but often the native falls into dependence on manipulators who use good intentions. In a good scenario, these are psychics who control energy and attract many loyal friends.

The general impact of the scarlet planet

Initially, the owners of Mars in Pisces are skilled in weaving intrigues and conspiracies, thanks to which they see through liars and can unravel other people’s networks of evil. If they are pissed off, they are able to plan the perfect crime, by understanding the psychology of both sides, or to take revenge many years later when aspected by Pluto and Chiron, but most often the carriers of Mars in Pisces leave the higher powers to administer justice without interfering.

Philosophy and mysticism attracts them and determines their attitude to life. Will and energy are hidden in the depths of fantasies and illusions, splashing out in a powerful wave only at moments of extreme interest in a certain goal or in stress. It is easy and pleasant to befriend the Neptunian Martians, although they rarely reveal the secrets of the soul, but they are always ready to help. It is easier to understand their riddles, knowing the features of the influence of the scarlet planet:

Children with Mars in Pisces are kind and dreamy, they are ready for a lot for the sake of friends: they will let others cheat, they will cover them from the teacher’s anger, right up to taking on other people’s misconduct, therefore it is necessary to cultivate self-respect in them so that the tendency to self-sacrifice does not lead to the destruction of their destiny. Their outlet is creativity, but they must not forget about sports, best of all water or team type. 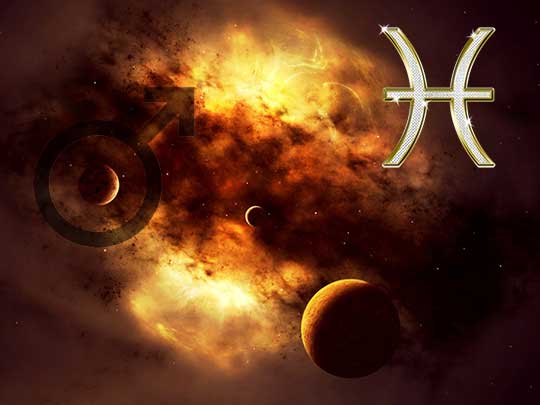 A rare gift for the stronger sex – the ability to listen, understand the problem and offer several solutions, make a man with Mars in Pisces an unsurpassed psychologist, doctor, teacher and attracts not only the dependent and the weak, but also future patrons and friends who help make his dreams come true. Talented in many areas, thanks to his subtle artistic taste and sophistication of the worldview, the native is not sure of his personal attractiveness and value for the modern world, therefore he often hides his abilities or is embarrassed to appear in all his splendor in front of the girl he likes. He enters into a relationship very carefully, having previously learned all the details about the object of sympathy. A sensitive and attentive Venus in Pisces, Cancer and Libra will help him to open up in the sensual sphere.

The meaning of destiny for the owner of Mars in Pisces is centered on living a love passion worthy of an Oscar-winning film or an exciting book. This is a mermaid, luring travelers she likes into a network of magnetic energy. Gifted with empathy and intuition, she telepathically reads the partner’s intentions, anticipating desires and transforming into the desired image.

With negative aspects, this lady can destroy the life of a person who rejected her passion, because the ability to weave intrigues and use others is the dark side of the water god of war. It is almost impossible to resist the siren charm with Mars in Pisces. Due to her optimistic attitude and the desire to be useful, she is a wonderful companion, inspiring a man to feats. She likes artistic, mysterious and complex partners with Mars in Scorpio, Libra, Cancer.

The favorable aspects of Mars with the main ruler of Pisces, Neptune, help the native to show the best qualities of this plane: intelligence, intuition, mercy and the practical realization of talents in the field of art and nautical affairs. The scarlet planet gives the will and energy to realize Neptunian fantasies, and a harmonious connection with the second ruler of Pisces, Jupiter, attracts high patrons and financial flows to realize dreams, gives the ability to make friends and arouse people’s sympathy.

The tense aspects of Mars with Neptune are extremely dangerous. Squaring stimulates the imagination, increasing its intensity: problems inflate, doubts turn into suspiciousness and obsession, and opposition provokes fatigue, emptiness of the soul after emotional outbursts, which is often compensated for with alcohol and drugs.

The energy and aggression of Mars Pisces, as a rule, comes out in a non-violent and non-competitive way. Such individuals are a bit of pacifists and do not like to deal with issues with someone in a direct confrontation or confrontational manner. Working among people and situations, or working behind the scenes, in secret, is their preferred style. When confronted with others, they tend to refuse rather than fight for it, since the ego is not particularly interested in personal achievement, glorification, material advantage, or gaining at the expense of someone else, so they may be characterized by others as weak-willed or ineffective.

For people born with Mars in the sign of Pisces , being at the top, being the best or the first does not mean much, so they can be quite happy in supporting roles, working for the good of others or for the cause in which they believe. Such people may find it difficult to plan clear and definite goals for themselves in the real world. They do not know what they want from life, although instinctively they realize that they have a higher purpose and they just need to find it. Pisces love to dream a lot, they have high ideals and there is a strong mystical and religious impulse.

People with such Mars in the sign of Pisces have a highly developed creative imagination and can successfully apply themselves in art or music. They are intuitive, humorous and diplomatic, calm on the outside, but restless on the inside. One of the negative qualities of Mars Pisces is indecision, slowness, interest in sensual pleasures, so they can resort to the help of alcohol or drugs as a way to escape from everyday pressure and responsibility. Self-control training is essential for them. They just need to take action and stop hovering in the clouds.