Mars in the horoscope reflects the level of the native’s readiness to confront enemies and destructive circumstances, the way of fighting with a burst of aggression and passions of a low energy level. In the card of women, the scarlet sign of the god of war shows a sexually attractive image of a partner with the features of a sign of position.

Mars in Aquarius is Figaro, rapidly rushing from one target to another, hastily trying to serve two masters. His mood is also changing rapidly: from friendliness and universal altruism to sarcasm and cynicism. In his youth, he inspiredly defends utopian lofty ideas, but when faced with injustice and meanness, he falls into pessimistic realism, from which a state of speed will help to escape: racing by car, motorcycle, running or flying on a hang glider.

The general impact of the scarlet planet

The owners of Mars in Aquarius defend the ideals of humanism, but do not really delve into the problems of a particular individual. They amaze others with original, and sometimes, frankly eccentric ideas, designed to pave the shortest path to a brighter future.

Mars in the kingdom of Uranus seeks to be a rebel, so its wards subconsciously stand in opposition to generally accepted standards of social order, delighting in breaking the rules and establishing their own laws. At the same time, personal freedom comes first for them.

Childishly curious, spontaneous, with a sarcastic sense of humor, the owners of Mars in Aquarius lack tact and diplomacy, which does not prevent them from being artistic and inspiring conductors of progress in science and art. It is easier to understand and accept their strange philosophy if people know the features of the influence of the red planet on character and destiny:

Children with Mars in Aquarius are always obsessed with original ideas and unusual hobbies, which sets them apart from the general mass of their peers. Earlier than others, they start blogging and social media accounts, engaging in photography and video filming, martial arts. Can’t stand the need to obey parents and teachers. Having a high goal for which they need to learn and train helps to come to terms with discipline. 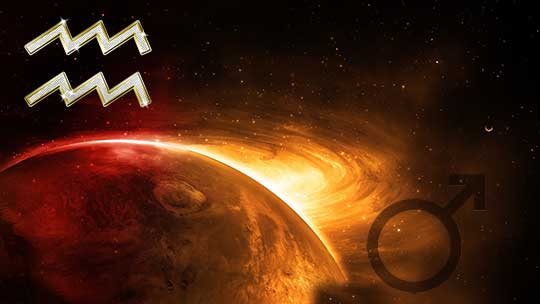 Mars in male and female horoscope

The owner of Mars in Aquarius is born to be a winner. Defeat leads to pessimism and sarcastic voluntarism. Despite the mind, a pleasant energy aura, a subtle sense of humor and the ability to support any topic of conversation, it is very difficult to get along with the native in everyday life, he is so picky and irritable in frequent mood swings, and also inclined to defend the right to silence and solitude when he wants …

In good times, he generously showered with compliments, arranges romantic surprises with an adventurous connotation, as a rule, a trip to an unusual place or engaging in extreme sports. Home life with everyday life and TV is not for him. He will not delve into the intricacies of the partner’s emotional experiences and suffering, politely withdrawing himself until his mood improves. Venus in Aquarius, Libra and Gemini will be a suitable partner for him.

Women with Mars in Aquarius were once militant Amazons, and now they are active in the position of feminists, arranging artistic performances in defense of the rights of the weaker sex. They can easily go out naked for a demonstration or master men’s professions, dressing emphatically provocative.

A girl with Mars in Aquarius needs a partner who recognizes her right to freedom of expression, style of dress, movement and communication. Between old trusted friends and a new lover, she will not hesitate to choose friends. Bright, daring and independent, she will not sit at home waiting for her husband, however, she would rather prefer a guest marriage or relationships with several handsome men, for example, Mars in Aquarius, Sagittarius, Gemini.

Harmonious aspects of Mars with the main ruler of Aquarius, Uranus, enhance the creativity of individuals and inventiveness, endowing them with a bright appearance and an extraordinary presentation of themselves in society. Unusual events and intense emotional upheavals contribute to spiritual growth and progress. With additional favorable ties with Venus, marriage with an extraordinary personality or an unconventional form of relationship, and with Jupiter – patronage of the most extravagant ideas from the highest ranks, the ability to talk on equal terms with the mighty of this world.

The tense aspects of Mars with Uranus give intolerance to other people’s shortcomings and successes, hot temper, a quick loss of interest in business, and as a result, a complete fiasco. This is compensated by harmonious configurations with Saturn, giving patience, perseverance and an unyielding desire to bring what has been started to the end.

The energy of people born with Mars in the sign of Aquarius is expressed in a unique and original way. They may even be brilliant in their way of thinking. Such individuals are resourceful, science-fueled, a little eccentric, non-standard, and possibly rebellious in their thoughts. Aquarians tend to work together with other people to complete assigned tasks. They love to take part in social interaction, group activities and get closer to people whose ideals and beliefs are similar to their. Mars Aquarians are progressive, democratic and do not bend to the desires of other people, just as they do not want to subjugate others. They are team players.

New and unusual methods of planning at work and technologies are characteristic of such people. Their energy level is very high, but at times their energy can be unstable and fluctuate, which is why there is a tendency for interruptions in work. Thus, they can be quite impatient and inconsistent in achieving their desires. They are intelligent, considerate, independent, freedom-loving and adventurous.

Mars in Aquarius gives intuition in emergency situations. They may be interested in the field of mechanics or scientific disciplines, science fiction may also intrigue others. Martian Aquarians may need to be in control of their radical and rebellious nature, and it should always be remembered that in some cases haste can be disastrous and costly. The negative side of Mars may be too aggressive character, quarrelsomeness, conflict and depravity.