Mercury is the closest planet to the Sun and an intermediary between the Higher and the human mind, located in the sign of Gemini in the natal chart , brings good luck to its owner, endowing with a quick and resourceful mind, humor, ingenuity and the ability to instantly establish friendly and business ties. Since the planet is here in its home (abode) , the individuals with such Mercury in Gemini not only thirst and obtain knowledge, but also enrich themselves through their skillful use.

It is easy, fun and enjoyable to be on friendly terms with such people, but it is much more difficult to be married and in a business partnership. The symbol of Mercury in Gemini is mercury and, like a volatile metal, individuals cannot be kept within the framework of loyalty and dedication to a common cause longer than they themselves want. Therefore, they need to study well the specifics of their way of thinking.

The owners of Mercury in Gemini magnetically attract information flows with one desire or a surge of interest in a certain news. The universe seems to be responding to their mental request. Therefore, they are always aware of what is happening in the world and the immediate environment.

A spiritually developed individuals notice that they always find themselves in situations where they introduce people, listen and teach. This is the karmic task of the bearer of Mercury in Gemini, fulfilling which, they provide themselves with the ease of being and luck. However, on this path, they and those close to them, it is necessary to take into account the complexity and diversity of the changeable nature of these natives:

With a weak position of Mercury due to the multiple negative aspects indicated by black lines in the natal chart, the versatility of the mind comes down to superficial knowledge, lack of concentration, excessive talkativeness, which interferes with succeeding in studies and career. Excessive nervousness must be removed through physical labor, meditative types of fitness – yoga, qigong, and the inability to concentrate – by practicing martial arts. 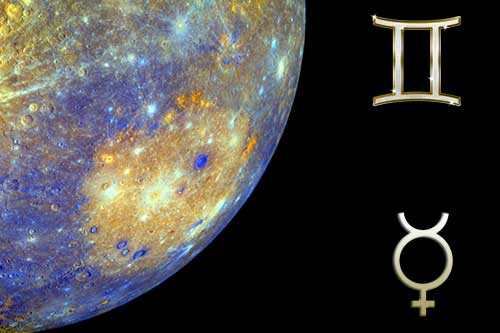 A man with harmonious Mercury in Gemini is a genius. If the planet is in an average position, but not burdened with quadrature, then its ward, if desired, will charm anyone with flowing speech, compliments and the ability to maintain a conversation on any topic, because his knowledge is deep.

He also writes beautifully, as well as speaks to the public, so success in journalism, business, trade, literature and on stage depends only on his personal preferences. In love, he is fickle, rarely remains faithful, since he is carried away by the new intellectual horizons of his beloved, and the sensual side of relationships does not bother him much. The path to the heart of the owner of Mercury in Gemini can easily be found by an erudite and witty person, for whom there are no obstacles in the sphere of knowledge of the world.

A Mercurian girl is curious and self-confident. Success is her natural state. She has no illusions about the world order, perceiving events in a balanced and rational way, instantly responds to changes and easily adapts to any environment, thanks to the flexibility of her mind, the ability to calculate logical connections and a broad outlook. Her flirting manner and ease of communication make her a desirable friend and companion. With a weak position of the planet, there is a risk of becoming a gossip and an intriguer, since the dependence on information flows remains, and the owner of Mercury in Gemini chooses the method of implementation according to the level of spirituality. She is a wonderful actress, teacher, journalist.

The retrograde satellite of the Sun prevents a clear and precise presentation of ideas seething in the native’s mind. People with such Mercury repeat the same thing a hundred times in different ways, and the audience is not clear where in the end they are leading. In addition, there is a tendency to grab a lot of things and not bring them to the end, so these wards of Mercury retrograde in Gemini should work on strengthening willpower and sequence of actions twice as much.

The dangerous aspects include the connection and squaring of the planet with Lilith – a perverse mind that engenders insidious plans to destroy the relationships and plans of other people, as well as with Uranus – the danger of becoming eccentric freaks who do not understand why their fantastic projects annoy everyone, and Pluto – revolutionary ideas to rebuild society, despite the sacrifice. Trines and sextiles with the Sun, Venus and Uranus contribute to well-being and success. Any aspect with Neptune clouds the clarity of the mind and requires more concentration on reality, although it contributes to creative self-expression.

People born with Mercury under the sign of Gemini in the natal chart are extremely adaptive, energetic, active, alert, curious and versatile. They are always on the lookout for knowledge, be it reading, talking, or traveling and meeting new people they constantly meet. They are very emotional and at times this can be a source of stress that needs a way out. Exercise is an effective way to release this tension. Such individuals are smart, witty and always have a joke or a ready answer to any situation.

They like to be involved in several things at the same time. In the future, this can become a problem for them – to take on too many things at once. Such individuals are fast enough in understanding new concepts and theories and just as quickly lose interest in ideas and projects if their curiosity is satisfied. They like to try everything – concentration and discipline are not their strengths. They have mechanical aptitude, or perhaps they are equally skilled with their hands. Discussions and disputes are characteristic of them, they also tend to take on cases without delving into their very essence. They tend to take on everything while not having a detailed idea of ​the case or subject, thereby really not knowing anything.

Their superficiality can be dangerous for them and to be successful they need to control their thoughts, words and actions, as well as find the goal, stick to it and develop persistence. Journalism, speaking, teaching, selling, advertising, or writing are areas where they can be quite successful. Mental restlessness quite often forces them to change jobs, places of residence, or undertake jobs that involve travel and diversity. They pick up theoretical material quickly and are very impatient with those who do not do it as quickly.