The planet that stimulates the development of the mind and is responsible for the success of self-expression, Mercury, in the sign of Scorpio takes a difficult position, being in the element of Water under the influence of Pluto and Mars, which affects a razor-sharp mind and stinging speech. The adage that a word can kill was clearly created after communicating with the owners of Mercury in Scorpio, who were in a bad mood.

It is rare for these individuals to be in good disposition, critically and aptly highlighting the shortcomings of the world around them and passing them through derogatory monologues. Only by touching on their favorite topics about death and sex will it be possible to have a sincere and interesting conversation with them. They are extremely worried about the otherworldly and mysterious: discussing this, they reveal themselves as attentive and witty interlocutors, not only possessing a layer of information, but able to see what is hidden from the eyes of the layman. In order to get along with them in the personal and work spheres, people will have to thoroughly find out the type of Pluto-Martian thinking.

An incredibly developed sixth sense helps the ownesr of Mercury in Scorpio to be known as  intellectuals, without making great efforts, for example, to predict the ticket number on the exam and prepare only it, or repair a complex device without special knowledge.

It is difficult for them to memorize a large amount of information presented in dry form, despite the love for the exact sciences, especially mathematics and chemistry. At the same time, they learn really interesting blocks of knowledge with ease. Given the interest in the occult and the mythological position of Mercury as  conductors between the world of the living and the dead, these individuals also make secret information explicit, independently unraveling the encrypted ancient knowledge, showing the following characteristic features of thinking:

Astrologers advise the owners of Mercury in Scorpio to be more careful in their statements, especially in a state of anger and rage: they can easily “scribble” trouble or jinx successful events. 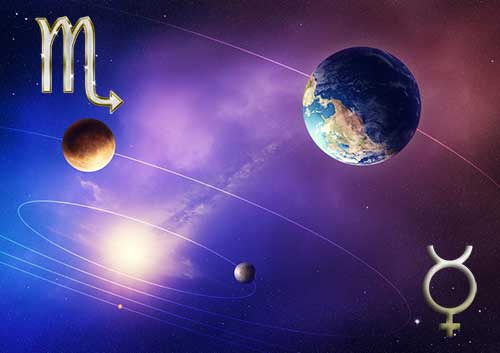 The mind and organizational skills of a Mercurian man are most clearly manifested in stressful and confusing situations when he need to find a way out of a difficult situation. Under normal circumstances, he gives the impression of an absent-minded, mysterious and laconic gentleman.

The affected planet fosters a thirst for a criminal environment and a brilliant use of talents along the line of destruction, which is aided by a natural understanding of psychology, technical knowledge and the ability to calculate variations of multi-moves. The head of the mafia or criminal group most likely possesses Mercury in Scorpio, although the planet is no less effective in helping representatives of the light side – rescuers of the Ministry of Emergency Situations, police officers, investigators, surgeons and the military.

Even a native far from the army has sympathy for the militaristic direction, adores cold weapons and firearms, books and films about the war. To build personal relationships with this man, woman need to be the goddess of sex, because this is an incredibly important area for him, without harmony in which he will simply disappear without further ado.

A woman with Mercury in Scorpio is a warlike Amazon, ready for verbal attacks, fighting for the truth, but incredibly witty and resourceful at the same time. She will never be at a loss when faced with danger and will not leave a friend in trouble. A tireless worker, but only in the case of an inspiring goal. A weakened planet plunges her into an abyss of pessimism and doubts about her abilities, which is why she has to be content with little with strong ambitions and this gives rise to sarcasm and rudeness in communication. Inspiration and strength will return classes in mystical disciplines, for example, astrology and detective investigations, even in a playful way.

Mercury in Scorpio in retrograde rotation makes the individuals more secretive and full of suspicion. They are more demanding of themselves than of others, but they also perceive any manifestations of aggression or ridicule directed at themselves personally, which is acutely worried and breaks off relations with the alleged offender, who did not mean anything bad at all. This is the type of scientist capable of deep research and discovery. It is necessary to trust the world more, to open up in communication, not to be jealous and not to control the personal correspondence of a loved one because of their own suspiciousness.

Favorable aspects with Mars and Pluto strengthen Mercury, and such people easily pursue brilliant careers in medicine, science and the military. It is also an indicator of a successful athlete. However, the negative aspects with them are destructive – internal conflicts, aggression, the desire to destroy before creating a new one, painful passion and pursuit of the object of sympathy, sexual perversion, especially in the presence of a square with Venus.

People born with Mercury in Scorpio have excellent mental focus and the ability to fully immerse themselves in their work. They love solving riddles and they are born detectives. The Scorpio mind can focus on sensual pleasures, and they often think about sex or death. Such individuals seem to be aware of things intuitively, through a non-verbal level, and prefer learning through direct experience rather than indirectly through books or lectures. They have mechanical ability and the gift of great hand work.

Perhaps such Scorpios could develop the ability to heal through the hands. Scorpios are quick-witted, resourceful, cunning, straightforward, sharp-tongued, and always ready to say what’s on their minds in the most caustic way. They love satire and other forms of critical humor. Scorpios want to know everything and not reveal anything at the same time. They have the ability to understand what is stored in the soul of people and their problems.

Mercury in the sign of Scorpio gives the ability to mechanics, and natural dexterity makes it possible to repair anything. On the other hand, Scorpios can be stubborn, quarrelsome, skeptical, cynical, headstrong, holding the opposite opinion than others. They have an interest in the occult.