Without the help of Mercury, which helps to reveal the solar potential in communication and self-expression, it is impossible to achieve success in the profession and relationships, but the owners of Mercury in Aquarius are not in danger – under the influence of Uranus, it is in exaltation and endows the wards with foresight, freedom of thought and the ability to create amazing new projects that did not exist on earth before. These are creators and inventors who know how to involve the whole world in the materialization of their dreams.

The position of the messenger of the gods in Aquarius encourages technological innovation and unexpected travel abroad. The reason for the change of residence will be prompted by the home of the planet. It is interesting that the voice of such individuals sounds more beautiful and interesting on the phone, skype, radio and TV broadcasts, which sooner or later leads people to professional activities in these areas. For these owners of Mercury in Aquarius, there are no boundaries for the embodiment of talents, but negative aspects can create many obstacles.

An exalted planet initially contributes to the development of an original and dogma-free mind, constantly spewing waterfalls of revolutionary ideas and, most importantly, knowing how to translate them into practice.

Sometimes intuition plays a cruel joke with these people: they are ahead of their time, and the progressive inventions that are obvious to them, designed to make life easier for people, are perceived by others as utopian fantasies.

The owners of Mercury in Aquarius need to periodically ground the flight of thought and remind themselves what world they live in, so as not to be considered an eccentric. Those who want to build a long and successful relationship with such people should know the characteristic features of Uranian thinking:

The owners of Mercury in Aquarius see the world more voluminously than an ordinary people, as if through 3-D glasses, so they easily refer to other people’s weaknesses and shortcomings, but for themselves require the same liberal attitude. 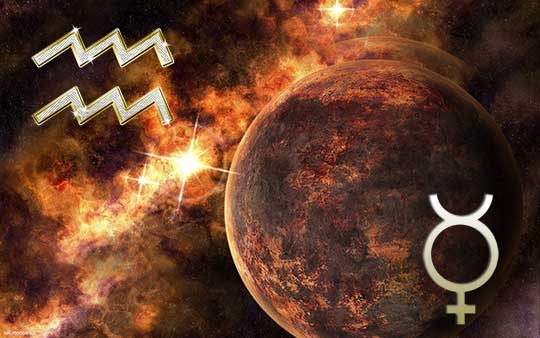 The lover of truth and liberal, a man with an exalted planet in the sign of Uranus, denies the generally accepted values, where the traditional concept of the family often falls. He needs a partner who can arrange an eternal holiday and renewal of feelings, a companion in spiritual aspirations and extreme entertainment.

He always has money, because thanks to his sharp mind, eloquence and artistry, he is instantly hired and deservedly promoted in the service. Material benefits are attracted by Mercury in Aquarius easily and naturally, but his ward does not like household expenses too much, but he will gladly acquire something spectacular and not very practical, but existing in a single copy.

Despite the fantastic intuition in business affairs, the native is unable to feel the pain and worries of another person and easily switches from discussing other people’s problems to his own interests.

A woman with Mercury in Aquarius is an optimist with a bright sense of humor, who knows how to find a common language with people from different social backgrounds. Her success is due to her sociability and, accordingly, connections, and not erudition and knowledge, which can be many, but not on a professional topic, but along a hobby.

She is interested in astrology, the occult and neurolinguistic programming and will naturally fall in love with a man with similar unusual interests. The material level of the chosen one does not matter for the owner of Mercury in Aquarius. It is much more important to look in one direction and share the idea of ​​personal freedom.

A planet in a retrograde movement has a twofold effect on individuals: they do not share interesting, revolutionary discoveries, so as not to become an object of ridicule in case of public disapproval, or, on the contrary, promote strange, utopian ideas, deliberately posing as a freak. In any manifestation, there is a possibility of the kidnapping of the native’s progressive discoveries by more practical and down-to-earth people.

An incredible success will be the trine and sextile of Mercury in Aquarius with Uranus and Mars, opening the heavenly gates of the universal treasury of knowledge and helping to embody any seemingly fantastic plan. A favorable aspect with Venus will give the ability to charm the interlocutor with an exquisite speech and subtle artistic taste, and with Saturn it gives a rare ability to systematize and structure a vast amount of information. Weaken the native’s intellect by squares and oppositions with Neptune and Jupiter, awakening laziness, absent-mindedness and a distorted perception of oneself as an unrecognized genius.

The thoughts of people with Mercury in the sign of Aquarius can be unique, unusual, fast and practically unreal, eccentric, not formulaic, scientific, strange and, perhaps, a little ahead of their time. They are progressive and unconventional thinkers, at the same time very open and receptive to new technologies, breakthroughs and the latest discoveries in any field.

They truly believe that humanity can solve its problems with creative intelligence, inventive minds and a scientific approach. They are little impatient with those who are conservative and lacking in imagination, as well as those who may even be afraid to think about it and try new things and ideas. Keeping abreast of the latest developments and technologies is an incomparable pleasure for people born with Mercury in Aquarius. Reading science fiction gives them food for thought about radical ways to look at things in new ways.

Such people have strong humanitarian aspirations, organizational abilities, and they enjoy participating in collaborative group efforts or affairs related to modern technology and innovation. The mind is versatile, disciplined, practical and original. They have a strong intuition and resourcefulness, with the ability to correctly assess the character and thoughts of people, penetrating under the masks that people around them wear.

Such individuals strictly follow their beliefs regardless of what others think of them. They have the ability to express their thoughts in simple and understandable language. On the other hand, Aquarius with Mercury in the natal chart can be eccentric, too free-thinking, radical, revolutionary and very stubborn.