The square is the astrological aspect that causes tension and strife in the character and life of the native. If conflict planets are involved in the quadrature, for example, the planet-aggressor Mars , then special attention should be paid to this constellation in the natal chart.

The moon is responsible for a person's need for peace, comfort and psychological comfort, and Mars, which forms a tense aspect with it, destabilizes a person's condition, makes him nervous and preparing to repel danger.

Influence on the nature and characteristics of a person's personality 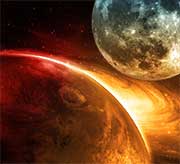 A person with a square Moon-Mars aspect in the natal chart is distinguished by impulsivity, anxiety and the presence of internal aggression. Overcoming fears, hardships of life and distrust of people, the native becomes strong, independent, strong-willed and decisive. He is ready to come to the rescue even under threat of danger.

The owner of the square must understand that noise, rudeness, aggression and rudeness are not the only ways to solve problems. Scandalous and defiant behavior can alienate others from him, so it is worth fostering good manners and developing an inner culture.

Reckless courage and recklessness can play a cruel joke with the owner of the horoscope. Potentially dangerous situations should be avoided in every possible way (for example, observe safety precautions at home and at work, make a choice in favor of safe driving, etc.).

The tense aspect between Mars and the Moon in the man's radix will tell you that he is experiencing difficulties in relationships with women. Most often, these problems come from childhood, since the man's mother was too strong-willed, authoritarian and aggressive.

In his personal life, the native will also give preference to energetic, decisive and enterprising women, but still internally he will resent their desire to dominate relationships and take initiative where they were not asked. Only by resolving this internal contradiction, the owner of the horoscope will be able to build a promising and stable partnership.

If a woman's radix contains the square of Mars and the Moon, then her character will have many masculine qualities: self-confidence, courage and a desire to take a leading position. That is why the personal life of the owner of the horoscope can be difficult at first.

Risk behavior, sexual liberation and sportiness, of course, will attract men to it, but those of them with whom a situation of competition and struggle for leadership will arise. The best partner will be a cautious, low-conflict, economic man who knows how to take care of his family.

Since babies with this aspect in their birth chart are very restless, sensitive and vulnerable, they need to be treated as gently as possible. Any physical discomfort or limitation of freedom of action causes a storm of emotions, noise, tears and screams.

The child's health should be given serious attention. It is necessary to protect him from injury, monitor his psychological state, check his eyesight in time and notice malfunctions in the digestive system.

Exercising regularly and learning how to protect themselves will help these children gain self-confidence, more courage, and less vulnerability.

Moon and Mars in different signs of the zodiac

Mars and Moon Square is an unfavorable configuration. The harm from it will be less if the Moon is in the sign of its strength. It is also desirable that Mars in the horoscope should not be weak in quality.

For example, the Moon in Taurus and Mars in Leo , the Moon in Cancer and Mars in Aries can give life trials and unfavorable family and household circumstances, but the native will still be able to get out of difficult situations as a winner.