The planet, named after the ruthless god of time, Kronos, is feared, waiting for obstacles and restrictions in the sign of sojourn. However, it is better to change the perspective and see Saturn as a symbol of discipline, organization, order and strict fulfillment of obligations. The planet of power favors practical and responsible people and removes obstacles on the way to the goal.

Knowing the subtleties of Saturn’s influence on character and fate, it is easier to build the correct tactics of behavior. Especially if Saturn is weakened in the fiery and impulsive sign of Aries. Strong desires and passions against law and order and self-control. People under this position are used to acting impulsively and thoughtlessly, and then methodically raking up the consequences or suffering from them. The most difficult position for the owners of Saturn in Aries in the 1st , 6th and 12th houses. Recklessness, quarrelsomeness, conflicts with dangerous people, fractures and injuries accompany the one who ignores the warnings of the time lord.

The influence of Saturn in Aries on fate

The individuals with such Saturn pay for impulsivity and irascibility immediately, receiving destruction of the physical body or loss of money. The first sign of the fiery triad, the most unstable and unrestrained, is forced to acquire the correct guidelines through quarrels, fights, opposition of parents and marriage partners to desires.

In the family of the Saturn carriers in Aries, fathers and grandfathers are often tyrants and despots, limiting the desire for freedom and creativity. The crisis should be perceived as a lesson in humility and the development of resilience, willpower, and the victory of reason over animal aggression. There is always a choice: to become a criminal suppressing others through violence, or a purposeful leader who concentrates fire power through clear planning and strict adherence to the goal. The easiest way to relieve the physical stress of Saturn in Aries is through sports – martial arts, boxing, running.

At work and in personal life, people themselves become dictators, causing suffering. In communicating with such individuals, others need to take into account the peculiarities of the Saturnian psyche in the element of fire:

People with Saturn in the sign of Aries unconsciously strive to compete with a marriage and business partner, annoying with attempts to prove their superiority. These people are  lone wolves, especially if there are no strong planets in the sign of Libra. 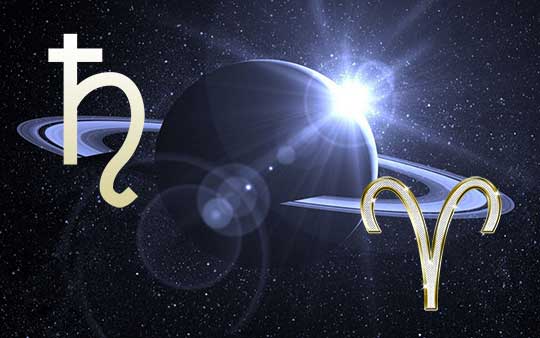 Personal life of Saturn in the sign of Aries

In an attempt to reconcile astrological fire and ice of temperament, the owners of Saturn in Aries themselves suffer from outbursts of irritability, excess of creative fuse and limitations of reason. They like bright, sexy women, but for some reason the mind and moral code impose a ban on communication with them, as well as on the coveted position of the leader of the team. They forbid themselves to be happy if there is no harmonious position of Venus, and Aries is not in the 5th house (strong position).

Men and women with even harmonious fiery Saturn speak directly of sympathy, ignoring courtship and romance. The feelings of the other do not bother them much, they do not understand why to waste time on beautiful words and spend money on gifts and flowers. Often, ugly or not particularly successful companions are chosen to shine against their background and completely subjugate in everyday life, continuing the ancestral line of dominance of one of the family members. It is impossible to remake their character, so people have to adapt and accept.

This is one of the signs of marriage to a widower or divorced woman and disappointment in love at a young age under 30. The main dangers and injuries are likely in the period from 42 to 47 years, and also after 70. With the position of Saturn in Aries, one should beware of bruises of the head, teeth, and also prevent cerebral vessels.

Favorable aspects with Venus and the Moon soften the difficult position of the planet of power in the element of fire. It awakens sensuality and emotional understanding of the consequences of words and actions on others, and also bestows good relationships in marriage and family. But the tense aspects with these planets turn the personal livesof individuals into hell, and themselves into insensitive crackers. Such people seize stress, trying to make up for the lack of spiritual warmth with bodily pleasures.

If there is a good connection with Jupiter, people can expect financial and career success as a result of hard work and creative innovation in the way they work. Due to fiery creativity, such people will receive honor and glory, but they have to be patient and persistent. The negative aspect with Neptune leads to religious fanaticism, and with Mercury – to stuttering, stage fright and public speaking.

To strengthen Saturn in Aries with stones – obsidian , hematite , lapis lazuli , blue topaz, if worn in a ring on the middle finger.

The best quality of Saturn is consistency, while leadership is a pronounced positive quality of Aries. Therefore, people born with Saturn in the sign of Aries can be very capable leaders who know what they want and are not afraid to go out and do it, no matter what the cost and how long it takes. Struggle and competition stimulate them to great achievements.

The arrogance that prevails in Aries to a high degree makes them feel like they are capable of more than those around them, ultimately forcing them to do work that will annoy them, just because they felt that others unable to fulfill it. The worst quality of the planet Saturn is selfishness, while Aries has a negative quality to interfere with the plans of other people.

Thus, Aries have a tendency to interfere in the affairs of others and try to resolve them. They can push them around, forcing them to do what they want, regardless of the desires of others. Aries can be a really good manager. They especially dislike restrictions of any kind, and take hostility when others dictate what to do, remembering that it is them who give the orders.

Obstacles, frustrations, and limitations give them the strength to jump into this pioneering game. Freedom comes only through responsibility and discipline. Impatience can destroy all the good things they try to do.

They must be extremely careful when developing their plans. Stability and security are very important to them and they should always keep this in mind. Feelings of inferiority can push them to make huge commitments in order to feel more meaningful and valuable, and the constant stress of trying to achieve too much can lead to headaches. Saturn in Aries encourages people to be selfless.