Uranus in the 2nd house

The second house in the natal chart is responsible for the main sources of income, from where a person can receive a constant profit for a dignified existence, and the expenses for which the money goes.

With a strong Uranus, the native’s wallet is either empty or full, and the whole financial history consists of ups and downs, which does not bother the ward of the planet of free-thinking and originality. He can get rich overnight and just as easily spend money on eccentric projects, promoting strange inventions and charities.

Uranus in the 2nd house makes the native easy-going and free from greed. Ways to make money are always original, but always with an element of creativity and an intellectual foundation. Sometimes they are on the verge of breaking the law, as the strong position of the planet gives rebellious character traits and protest against generally accepted moral norms.

In the presence of additional negative aspects, such a position of the planet can be found among high-class scammers, for example, among art thieves and artifact hunters. The weak position of the planet warns the native not to get involved in risky financial enterprises and not to make high stakes in gambling.

Character features and methods of making a profit

The owner of Uranus in the 2nd house prefers the Art Nouveau style, follows the technical innovations of brand firms, is easily seduced by advertising offers, even if he has repeatedly been disappointed in them.

He is attracted by everything foreign and exotic, including travel and places of work. With harmonious aspects, such a person can turn a barren desert into a blooming oasis, and a small cafe into a huge corporation, like Ronald McDonald. A happy occasion comes to the native through unusual acquaintances from the field of astrology, mathematics, physics, politics and show business. He can get rich by developing new products in the field of electronics, computer technology and Internet projects.

The karmic task is to learn discipline and financial planning, and to understand that money is not necessarily a temporary component of life or a burden of responsibility, but a necessary factor in maintaining an independent status.

Struck Uranus turns the native into an unpredictable boss who has seven Fridays a week, and in the position of a subordinate into a willful worker who denies instructions and corporate ethics.

The planets in the 2nd house symbolize the earning opportunities in youth, therefore it is advisable for the native to use his Uranian talents as early as possible in order to succeed. 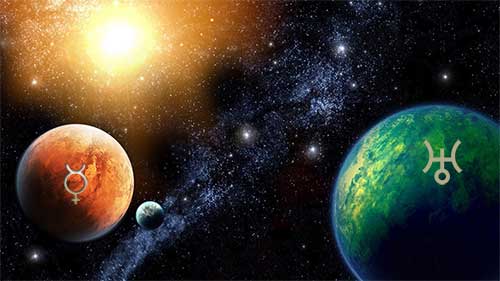 Influence of the zodiac signs

Uranus in the 2nd house intends to free a person from everything that slows down the development of his talents and distracts from a higher goal. If the native goes into a calm, philistine existence, ceases to create, both sources of income and accumulated funds disappear. You need constant movement and expansion of your business, as well as being in society, establishing business ties, especially as a freelancer.

The position of Uranus in the 2nd house indicates in which area it is better to apply the abilities and how easy it will be to get it. The planet feels best in the following signs:

1. Aquarius is an intellectual job that requires bold creative ideas. All doors are open to the native, since the heavenly lord of rebels and originals rules this constellation. It is desirable to work in a large corporation with the latest technical equipment and high-quality communications. Success awaits in Internet companies and in the field of astronautics, computer programming.

2. Scorpio – the talent to transform and remake the outside world and rule over souls, which can be useful in the field of psychotherapy, politics, surgery, drama and technical industries. The native will need to defeat personal aggression against the existing world order in order not to become a destroyer instead of a creator.

3. Virgo – the ability to concentrate on little things, transforming them into something new, gives the world talented scientists and inventors.

4. Pisces – clear psychic abilities, empathy can be in demand in literature, psychology and religion.

Uranus is weakened in Leo and Taurus, which suppress his desire for free flight with a selfish desire to have everything at once, forcing those around him to serve their personal goals. This slows down the movement of the planet and makes it difficult for the native to express himself. The position in the other signs requires the manifestation of the highest qualities of these constellations at work in order to generate income.

The favorable aspects of Uranus in the 2nd house indicate sources of inspiration for self-realization, expand the areas of application of talents. For creative people, the most promising aspects are the aspects of Uranus with Neptune, Venus, the Moon, which gives them unlimited imagination, a sense of style, original ideas and the ability to express it in the best way, especially if there is a sextile or trine with Saturn, which is responsible for structuring and timely embodiment in the physical the world.

For businessmen and politicians, harmonious aspects of Uranus with Jupiter and Mars will be an excellent help, and for scientists – with Mercury and Aquarius, and sextile and trine with the Sun ennobles and supports a representative of any profession.

The negative aspect of Uranus in the natal chart shows where the difficulties will come from and what lower vibrations of planetary opposition must be overcome in order to prosper. As a rule, these are irresponsibility, non-punctuality, tactlessness and willfulness.