The giant planet with the name of the main god of the Romans, Jupiter , symbolizes happiness, prosperity and wealth in a broad sense. With the harmonious development of a person, it always enhances the qualities of the sign in which it is located, increasing strength, energy, the ability to earn, and increases laziness, voluptuousness, extravagance in the weak in spirit. The owners of Jupiter in Cancer belong to a rare category of the planet’s favorites.

In the kingdom of the Moon, a magnet of good luck in exaltation, which means it is ready to feed the best properties of a mystical union: responsiveness, diplomacy, friendliness, liberality and concern for others. In the heart of natives lives love for the Motherland, family, God, which is cramped within narrow limits. Pouring it out on the harsh reality, improving the world, they become richer spiritually and materially. There are practitioners who know how to manage finances and people with the mystical consciousness of a poet. Managing such a spectrum of talents is not easy, they need to know how to stay at the proper height.

The impact of Jupiter in Cancer on fate

A vivid imagination, grandiose plans, an understanding of their exceptional talent in the field of art, business, medicine, prompts the owners of Jupiter in Cancer to chase the bird of happiness to distant cities and countries. The thirst for knowledge of new cultures and traditions will satisfy their curiosity and form a mature personality, depriving them of their infantilism, but real success and financial prosperity await them in their native places.

People born with Jupiter in Cancer cherish the traditions of the family and are often ambassadors of national culture abroad, teaching foreigners their native language (especially with pronounced 9 and 10 houses). They are ambitious and hardworking, but even reaching social heights, they generously endow with warmth, disinterestedly help people and animals. In their system of worldview, the following come to the fore:

Carriers of Jupiter in Cancer are just and kind leaders, but they can only take the post of a leader with the help of a support group or with patronage from above, because their natural modesty and gentleness of character will not allow them to infringe on someone’s interests and single-handedly push their own person upstairs. 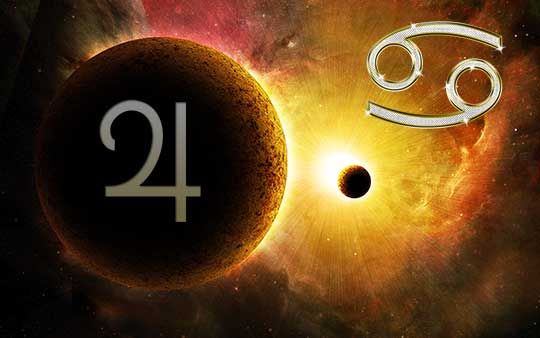 Jupiter in Cancer for a man and a woman

Lunar Jupiterian man is a godsend for a girl looking for an understanding, loving and generous companion. He dreams of incredible love and a strong family, for which he is ready to devote time not only to career achievements, so that his relatives do not need anything, but also to plan interesting leisure activities. A man with Jupiter in Cancer views his house as a quiet, cozy haven, where it is pleasant to return after exciting travels, visits to theaters, cinema and restaurants, but he will not sit there in the evenings in front of the TV.

He is strongly attached to his relatives, especially to his mother, and any criticism in this direction is regarded as an enemy attack, although he is ready to forgive generously if the enemy repent. A potential wife should know that in case of strife, the native will choose the mother, and upon divorce, he will never give up the children.

Lunar Jupiterian lady is sentimental, noble in spirit and romantic, which makes her overly trusting, and naive in her youth, but the strong position of Jupiter in Cancer takes away serious troubles. Having experienced several betrayals, she becomes more confident and independent, having learned to resist evil, but remain faithful to the principles of honor.

In relationships with men, the owner of Jupiter in Cancer is motherly caring and ready to fill the most secret corners of the soul of the chosen one with love, which often causes irritation. With high ambitions, she is not fixated on work, preferring freelancing within the walls of a cozy home, decorating it with unique and valuable things. The main meaning of her life is love and children.

The favorable aspects of Jupiter with the Moon – the ruler of Cancer, enhance intuition and insight, mercy and the desire to take care of the whole world, give support to the mother and all women of the clan, thanks to which the native receives health, longevity and the ability to heal the words and knowledge surrounding the energy. With a harmonious connection with Venus, wealth and the realization of purpose come through a successful marriage with a wealthy person for love, especially if there are connections with the 7th and 10th houses. Strong Mars, supporting Jupiter in Cancer, gives the lack of courage and determination in achieving the goal, and guarantees a protective partner to women.

Tense ties with the Moon awaken the negative qualities of the watery Jupiter: whims, tearfulness, accusations of others for personal failures, and the main vice is gluttony, inability to properly organize the work schedule and alcohol abuse, which aggravates the affected Neptune, which also contributes to religious fanaticism and excessive emotionality.

Individuals born with Jupiter in Cancer are loving, peaceful, friendly, sociable, sympathetic and, perhaps, quite patriotic people. They have a vivid imagination and utopian dreams. There is an interest in mystical things. Such people have a good financial instinct, mainly in real estate, there is the ability to accumulate property, especially in old age.

As a rule, they received a lot of help from their parents or relatives. Such individuals may have problems with weight, especially at a later age, as they are used to enjoying delicacies. Their potential will not be fully realized until the moment of middle or late age. Stinginess may subsequently arise, sticking to past memories. They store everything in themselves. Character traits such as sentimental tearfulness and great emotionality can become big problems in their lives.