Chalcedony – magic and healing properties of the stone

Chalcedony is a magical biblical stone mentioned in the New Testament as one of the minerals in the foundation of Solomon's temple, not only because of its incredible strength, but also its ability to heal and attract wealth. However, the ancient quartz rock includes hundreds of grape-like druses of all kinds of shades: from white, blue, blue to emerald green and scarlet. These are chrysoprase, jasper , carnelian , mtorolite, flywheel, agate .

Transparent and opaque, jewelry and ornamental, stones of the chalcedony family are diverse, but the surface, as a rule, is covered with a fine pattern of crystalline fibers. For jewelry, bluish-lilac sapphirine and white kahalong are most often used, which have mature magical powers.

Smoky blue quartz of volcanic origin was worn by Julius Caesar and Napoleon, it was believed that the sacred stone opens access to information of the subtle world and allows you to foresee enemy actions when planning military operations. For creative meditation, chalcedony in silver was used by Pushkin and Byron. It was inserted between the rings of chain mail, inlaid with weapons and woven into the harness of horses of noble warriors for a healing effect in case of injury and intuitive evasion from a villainous attack in battle.

Pharmaceutical mortars, candlesticks, figurines, decorative elements, cups are still made from the ornamental mineral, and jewelry is most often made to order, since this stone is not very well known among ordinary people. The most beautiful gems are mined in Brazil, Uruguay and India. 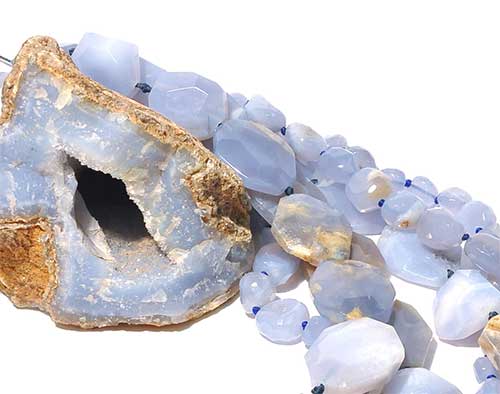 Chalcedony is a unique converter of negative energy into positive. It removes excess aggression, turns depression into a thirst for life and a desire to act. Despite the opinion that this is a female stone, chalcedony jewelry endows with enchanting charm and men, making the owners unusually attractive to the opposite sex.

Long-term contact with products made from lilac mineral prolongs youth. Light yellow and blue gem in the south-west and north-east of the apartment extinguishes conflicts and quarrels, restores and maintains harmony and love. Among esotericists of different directions, chalcedony is known for being:

Chalcedony biofield is so strong that it creates an invisible protective shield around the owner. It has beneficial effects on mental health, relieving depression, apathy and sadness. The white mineral is used as a powerful short-term remedy, if you wear it for more than three days, you can face hallucinations and clouding of the mind, nightmares. Only an experienced magician can withstand the strong energy of snow-white chalcedony. Gems of other shades, especially blue and green, gently heal the body:

Chalcedony does not like egoists and eliminates the feeling of possessiveness and jealousy, fosters altruism and the desire to create for the good of society. Singers and actors will preserve their voice and strengthen their vocal cords if they drink water before the performance, in which the blue gem has been infused for 12 hours. 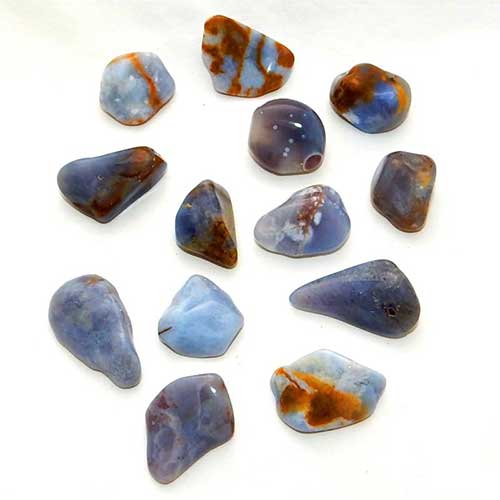 Thanks to its many shades, the chalcedony family gets along with the entire zodiacal circle, protecting and preserving in times of adversity. Saturn and Mercury became the most powerful patron planets of the stone , therefore, coming into contact with the magic of jewelry made from these gems every day, you need to prepare for cardinal changes in life, career, relationships. It is especially recommended to wear them when Saturn is square with Jupiter, Mercury and the Moon, as well as when Mercury is in Pisces and Cancer, and Saturn is in Capricorn and Scorpio.

Chalcedony will magically remove problems with self-expression and the realization of purpose. Among all the signs of the zodiac, he especially favors family-oriented Cancer , allowing the just Sagittarius and versatile Gemini to leave the space limited by the house into the big world .