Mars in the 3rd house

Mars is a planet of power and energy, and its location in the 3rd house of the horoscope makes a person sociable, inquisitive, resourceful and quick-witted.

In addition, Mars is associated with aggression and conflict. The owner of the horoscope often has problems because of his sharp tongue, sarcasm and sharp remarks. Such people are prone to arguments and discussions. Even the smallest disagreements with an opponent make them hot. At the same time, the native often does not choose expressions and does not go into his pocket for a word. This behavior cements him the glory of a conflict, unrestrained and quarrelsome person.

Brothers, sisters and close relatives play an important role in the life of a native. Relationships will not always be easy. Quarrels, rivalries and competition in the family are possible.

The native's inclinations and behavior

The owner of Mars in the 3rd house of the natal chart draws attention to himself due to his sharp mind, sociability and quick reaction. Such people can achieve great success in research, writing, journalism. It will be good if the job involves travel, interaction with people and the conclusion of various deals.

In the process of work, mobile communications, computers, etc. are used. The man is impatient. Least of all, he likes to wait a long time for an answer to his messages, so after a while he calls. Such a person can show pressure in business situations, and often achieves what he wants thanks to courage and a natural gift of persuasion.

In order to feel free and independent, the native needs his own vehicle. Without him, he is like no hands. By the way, many owners of Mars in the 3rd house have a great interest in technology, and therefore they can fix a lot in the mechanism of a car, motorcycle or bicycle.

The owner of Mars in the 3rd house has a thirst for knowledge. They don't have to be abstract. Best of all, native learners learn information and skills that can be immediately applied in business. Such a person can be attracted by chemistry, physics, foreign languages, financial and technical sciences.

Mars in various signs of the zodiac

The essential power of Mars, located in the 3rd house, determines how successful the native will be in the intellectual sphere.

For example, Mars has power if it is in Capricorn . Knowledge will be comprehended by the owner of the horoscope slowly and systematically, and after a while it will form a solid basis for future activities.

If Mars stands in a sign of its weakness (for example, in Cancer ), then the native will experience problems in learning. Laziness, inattention, and poor concentration will hinder mental success. 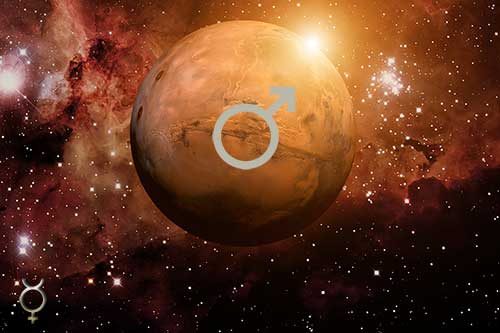 Mars in the 3rd house of a man

If Mars in a man's birth chart is in the 3rd house, then this speaks of his bold, adventurous and sociable character. He manifests his strength primarily in the intellectual sphere. Such a person loves to argue and puts some pressure on the interlocutor if he sees that they do not agree with him.

The owner of the horoscope loves high-speed driving and sports that require fast movements and lightning-fast reactions.

Mars in the 3rd house of a woman

Mars and its characteristics will describe the type of men most attractive to the owner of the horoscope. If the luminary is in the 3rd house, then the woman will give preference to a man who is erudite, sociable, open and easy-going.

Such women easily strike up relationships. Acquaintance can happen on the street or on social networks. Sometimes the owner of Mars in the 3rd house is helped to find a soul mate by her relatives, relatives or good acquaintances.