The rarest hexagram in the horoscope corresponds to the ancient designation Anahata – chakra – heart center. Two intersecting trigons: one with a top up, the other down, are inscribed in the zodiacal circle, and six equidistant planets create sextiles, while three pairs of the figure's participants form oppositions. The uniqueness of the configuration is that the distance between 6 points out of 10 must be the same.

Most often, in addition to planets, fictitious points are involved in the Big Sextile (the second name of the hexagram): Lilith, Selena, Lunar nodes, which smears the picture and weakens the effect on the native. On July 29, 2013, there was an exact conjunction of aspects in the Star of David, as previously seen in 1945, 1954, 1995. One of the most accurate figures based on real planets is in Laima Vaikule's natal chart.

Star of David and influence on fate 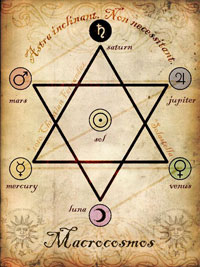 According to legend, the six-pointed star was in the horoscope of the biblical king David, however, studies of the natal charts of our contemporaries showed that not all of them became successful and great.

Most studied brilliantly, were gold medalists and came out unscathed from troubles, but without intrinsic motivation and development of talents, the use of opportunities bestowed by sextiles, the configuration will have only a mild harmonizing effect on life instead of the flow of abundance and luck that carries the ward to world fame.

Only the positive aspects will give exceptional opportunities for take-off, the innate ability to attract friends and useful partners, but there is a huge risk of not coping with the abundance of interests and hobbies, spray the unique energy into trifles and de-energize the aura. In this case, the tense aspects that provoke the emergence of difficulties and competition are irreplaceable, which will help to consolidate energy and focus on the path to the goal. Star of David Features:

As in the case of other theoretically favorable configurations, the speed of getting what you want and the strength of resisting adversity depend on the characteristics of the planets. If most of them have a masculine energy – Mars , Saturn , Jupiter , then it is easier for the native to make a choice and purposefully move along the chosen path. Feminine Venus, Neptune , Moon blur consciousness and lead astray by temptations.

Examples of the Star of David from life

The six-pointed hexagon is not a guarantee of a cloudless happy fate. Even if you remember King David, who gained wealth, love and glory for centuries, you can see a thorny path full of betrayals and attempts on life.

Another thing is that tireless spiritual development and adherence to the biblical commandments helped to turn on the configuration to its full potential, harmonizing further destiny.

An ideal six-pointed star, consisting of equal segments, is also called Almaz, and gives a rapid, bright takeoff, a fabulous coincidence, like a meeting of a rich philanthropist with a talented singer singing on the streets for a penny, but without caution and self-improvement, the fate of such people tragically ends. Mainly due to frivolity, a sense of impunity and depravity.

It is interesting that if the White Moon is present in the hex, a person becomes omnipotent and invulnerable, but the presence of other fictitious points creates fatality and the inability to resist karma. For example, in the horoscope of the executed Marie Antoinette, the ideal Diamond includes the Lunar nodes, Selene and Lilith. Success to Laima Vaikula came late, after 35 years, due to the female Neptune, Moon, Venus, who gave a youth full of problems with money, alcohol, but as spiritual growth, good luck came.

Elaboration of the Star of David

The planets that form sextiles will show what talents and the highest qualities of character need to be developed throughout life. The key to success will give the study of Saturn and the sign of the zodiac in which it stands. Because it is the lack of perseverance and will that hinders the realization of the native's unique talents.

The points of the rays of the Star of David are most often awakened in turn during progressions and transits, so it is important to determine their sequence, tracking the probable events and seeds of opportunity hidden in them. Hence, the throwing of the included sextiles from the white strip into the conditionally black periods of oppositions, requiring concentration of willpower and hard work to overcome in order to enjoy the gifts of the next sextile again.

The second condition for entering a long streak of success is the neutralization of the sense of self-importance. Otherwise, the energy of opposition breaks from the inside, throwing down from the achieved results. If there is Uranus and Pluto on the peaks of the Big Sextile, then one cannot delude ourselves about our own invulnerability. Lack of caution will not completely kill, but it will provoke injury.