Azurite – the magical properties of the stone

Azurite is an opaque mineral, a type of copper ore, surprisingly pure blue shades: from azure blue to piercing indigo, mixed in a single whirlwind of overflow. This stone is a reflection of the endless blue of space in the earthly material, for which magicians, artists and jewelers of Arab and European countries have always appreciated it.

A vibrant palette of blue hues prompted painters to use azurite powder to create paints. They painted Egyptian frescoes and ceilings of Roman villas. With blue azurite, Michelangelo painted the vaults of the Sistine Chapel so naturally that contemporaries joked that he moved the sky there, and Andrei Rublev painted the angels' toga mineral on the Trinity icon with blue pigment of the mineral toga.

The mesmerizing depth of indigo symbolizes the strength of spirit and wisdom, qualities that the energy of the stone carries in itself. It happens that azurite fuses with malachite in bizarre combinations of green and blue, from the powder of this hybrid, artists obtained a bright turquoise pigment.

The Celts used azurite for meditation before battle in order to concentrate on fighting qualities, rejecting everything else. The texture of the stone is soft, which makes it difficult to make jewelry from it, and this increases the price of the product. However, the beauty and protective properties of the mineral are well worth it. It must be remembered that when exposed to humid air, azurite can change color to green and become a copy of malachite. 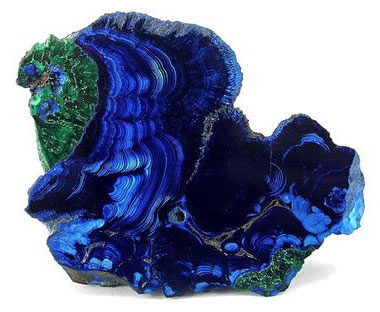 Azurite is closely related to the third eye chakra – Ajna. He gently reveals it and helps his master to see the true essence of things in the events and intentions of others. With prolonged contact with a large stone, you can unexpectedly learn to read people's thoughts and influence them mentally, but only with good intentions.

Azurite is a stone of honesty. He keeps his owner from lies and duplicity, but he will not allow him to deceive and harm someone. Such a talisman is necessary for fighters against injustice – lawyers, journalists, police officers, rescuers, including firefighters. In addition, azurite, being in the human biofield, helps:

If the owner of the azurite switches to the dark side, the stone stops sharing its magical power with him and may even crack, destroying itself. 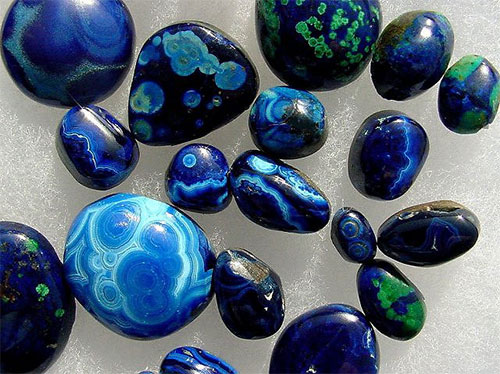 Azurite has a beneficial effect on the internal systems of the body associated with the work of the mental body. It is simply necessary to have it with you suffering from hypertension and epilepsy.

Official medicine cannot definitively cure these diseases, but azurite will influence the cause of their occurrence, which will give significant relief and prevent frequent attacks. In addition, the blue mineral, acting on the mental level of a person, harmonizes the state with the following problems:

Azurite helps the consciousness to free itself from negative psychosomatic attitudes, which led to a deterioration in health, and at the same time gives enough of its own healing energy to turn on the internal resources of the body.

You can simply put it on a sore spot and the mineral will remove unpleasant sensations. During the acute period of the illness, it is useful to meditate by placing a stone right in front of you – to focus on its energy and ask to heal the root of the problem. He will definitely help.

You need to wear it in courses – 3 days and a week break. For pressure problems, it is acceptable to wear azurite jewelry for a month and then put it off for a couple of weeks. 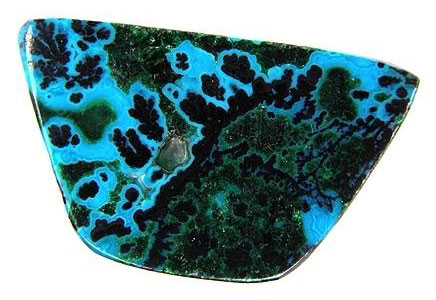 Yin energy predominates in azurite, so it will be good for all representatives of the element of Water who need mental stabilization of their personal emotional strength, first of all – Pisces and Scorpio .

But according to an ancient legend, azurite is also associated with a certain White planet of the air element. Despite the official version that the blue mineral is attributed to the influence of Jupiter , it really quickly helps Libra and Aquarius in solving their zodiacal problems – difficulties with decision-making and psychological imbalances.

Esotericists advise Gemini not to wear a stone with their innate diversity and changeable views. Azurite will regard this as deceit and will hasten to punish Gemini, or it will simply fade. But the favorites of Jupiter, the famous planet of justice, Sagittarius and Leo , he will help, as well as straightforward Taurus and Virgo .

Regardless of the zodiac sign, azurite can help when the associated planets in the individual's natal chart are weakened by negative aspects (indicated by black lines):

In order for azurite not to lose its magical power, you need to store it in a dry place, do not wet it, and most importantly, always act honestly. Then the magical blue stone will generously thank its owner with protection and healing.