Libra is active from September 24 to October 23. The natural element of the sign is Air. The governing planets are Venus and Saturn .

Venus's wards are aesthetes. They dress tastefully and take good care of themselves. This trait is common to both men and women. An attractive, sophisticated appearance is combined in Libra with sincerity, modesty, and nobility. Representatives of the sign love to waste money, but – strange! – do not lack them. In the company, no one else, like Libra, knows how to create an atmosphere of friendly fun. They take good care of their loved ones. They are never offended by trifles. Children and animals instinctively sense their kindness.

Libras need to strike a balance between the light and dark sides of their personality. To solve this problem they will be helped by the stones talismans, selected in accordance with the horoscope.

Libra is the middle, balance, bridge between rational Virgo and passionate Scorpio. This sign has no pronounced friends and enemies among the stones. Libra can wear jewelry with almost all gems. However, some of the minerals are preferred.

The seventh sign of the zodiac is associated with the beautiful time of golden autumn. For him, stones are especially favorable, reflecting the overflow of blue, blue, lilac sky and colorful foliage: green, yellow, orange in their faces. Besides these, some dark minerals are recommended – symbols of the impenetrable black autumn nights.

Set up for fruitful work. Will give the courage and determination necessary to achieve the goal. Will bond the feelings of the bride and groom. Aquamarine is a symbol of loyalty and a strong family.

Libra is in dire need of a talisman that embodies firmness of character. This function is successfully performed by a diamond . Under the influence of his energy, the owner of the gem will learn to make independent decisions.

Having submitted an original idea, Libra recedes into the shadows. Other people take their merits. Lapis will correct the situation, give persistence in the implementation of plans and projects.

Sparkling reflections on the surface of the stone can give a timid, doubting person faith in himself, transform his laziness and passivity into an active life position. But if the owner of the opal is devoid of decency, the volatile mineral will turn to him with its insidious side.

Strengthens the fragile emotional state of a person. It helps the owner to become a more whole person by balancing the dark and light energies of the dual sign. 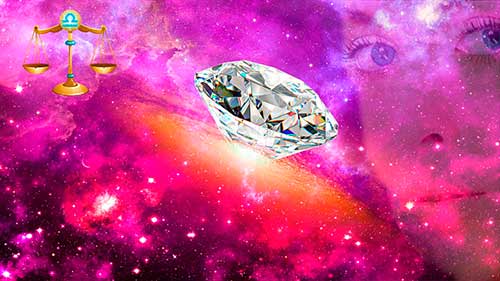 Selecting stones by decades of birth date for Libra

The influence of Venus extends most strongly to the representatives of the first decade. They are sensitive, graceful, gentle, but they do not know how to stand up for themselves at all, they can hardly bear grievances. Their talismans help to forget disappointments, relieve anxiety:

Representatives of the Saturn decade are humble and selfless workers. The well-being of their household is much more important to them than money, career and self-affirmation. In order for these people to find strength and time for themselves, they need active minerals:

Libra of the third decade is under the additional influence of Jupiter . They are sophisticated and artistic. Many musicians, artists, writers were born in these days. Typical weaknesses of the decade: delicacy, a tendency to unexplained fears and nervous breakdowns. The magic of stones saves from depression, gives prudence, wisdom, peace. Period gems:

The sign can be damaged by gems of bright red shades. For example – hematite and pyrope . Although the opinion of modern Astrologers disagrees about unsuitable stones and some, on the contrary, advise choosing stones, not according to the Sun sign, but according to a weak planet in the natal chart . List of stones to which Libra should take a closer look: