Uranus in the 5th house

Uranus brings change, new events and oddities to any area of ​​life, but it is especially clearly manifested in the 5th house of the horoscope , which is responsible for raising children and the very possibility of conception, creativity and romantic relationships.

The symbolic patron of this area of ​​the natal chart is Leo, therefore Uranus is initially weakened and can make it difficult to implement key themes in the native's life. A person constantly strives for pleasure, falls in love with extraordinary, and sometimes odious personalities, and in raising children is guided by newfangled theories and gives them absolute freedom, encouraging antisocial behavior, which does not contribute to warm family relationships.

But Uranus in the 5th house superbly supports all the creative impulses of the native, helping to realize even the strangest of them.

Character and relationship with children

In women with such a position on the planet, the maternal instinct is weakly expressed: they do not strive to give birth, or it is difficult for them to get pregnant and bear a baby. Having become a mother, the owner of Uranus in the 5th house tries to bring him up independent, so as not to interfere, since she has many creative and business plans. Children are born gifted with artistic talents or a technical mindset.

For men, the child will also be a topic for experiences – the inability to constantly be together due to divorce, hard work, separation. As they get older, representatives of both sexes experience difficulties in communicating with young people, categorically not understanding them. With additional harmonious aspects, on the contrary, friendship with children is possible, thanks to the freedom of views of parents and an understanding of modern customs.

However, his own personal life and love experiences mean much more to a native, and he will never be a caring grandfather or grandmother who is a stay-at-home. These indicators are enhanced when Uranus is retrograde.

Positive character traits in this scenario:

A native with Uranus in the 5th house often becomes a famous singer, musician or film actor, especially if there is an additional Sun in the 12th house and Neptune in the 10th house. The negative aspects turn him into an adventurer hungry for fame, women can have miscarriages or intentional abortions. 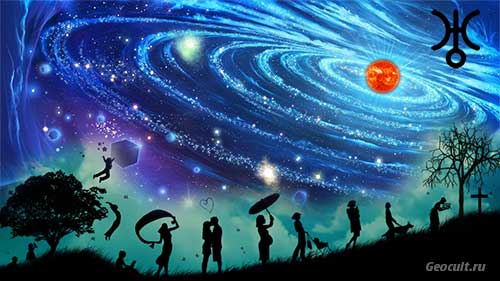 Influence of position in zodiac signs

The position of the planet is strongly influenced by the ruler of the constellation where it falls. The element of Water in the signs of Scorpio, Cancer, Pisces will improve fertility and soften the character of the owner of the restless Uranus.

Such people are emotional and adorable in communication, stress-resistant. They are interested in alternative medicine, new religious movements, the history of ancient civilizations and its connection with modernity. Brilliant career in chemistry, medicine and literature.

The signs of Fire, especially Leo and Sagittarius, endow a person with an explosive temperament and a thirst for public recognition, and the family will always be secondary to him. Realization takes place in politics, business, art.

The energy of the elements of the Earth, in combination with Uranus in the 5th house, forms a purposeful practitioner who uses original ways to achieve what he wants. This is an invaluable quality for a scientist, programmer, teacher.

Location in the signs of Air endows with oratory, artistry, a sharp mind, thanks to which the native will prove himself in journalism, commerce and show business.

The location of Uranus in Taurus, Gemini and Libra will contribute to a harmonious relationship with children, and Virgo, Aries, Capricorn and Aquarius will negatively affect the fertility of the body and cause emotional coldness and alienation of both the native and his offspring.

The overall influence of the planet can be enhanced or neutralized by the presence of favorable or threatening aspects with other celestial bodies and stars. If there are other planets in the 5th house besides Uranus, their compounds also have a strong effect:

1. Moon – close connection with mother, intuition on the verge of clairvoyance, artistic ability. There may be mood swings, frequent depression.

2. Mars – competition with his brother, the desire to turn the world upside down, revolutionary views.

3. Jupiter – the desire for power and domination both in relationships and at work. The sign of the leader.

4. Neptune – bright creative abilities, an unusual view of art and their own role in it, boundless imagination and desire for a bohemian life.

5. Pluto – found among the reformers, a person is able to lead opposition movements and change the world order.

6. Mercury is a literary and oratorical gift, while the native is most often an ardent debater and provocateur.

7. Venus Mercury in the horoscope – favorites of society and company, family darlings, whom even unworthy behavior and numerous novels are forgiven.

The life of a person with Uranus in the 5th house will never be easy and calm, but there will be many interesting events and meetings with unusual people.