The new moon is the day when the old moon has already departed, and the new one is about to appear. It is usually impossible to see her in this phase. It is located in relation to the Earth so that people cannot see the surface of the Moon illuminated by the Sun. A new moon is comparable to a solar eclipse, only it happens more often and less spectacular. You can see the young moon only after a certain time after its birth.

After a certain time of the new moon, the western part of the firmament is illuminated with a thin ray of light from the young moon , which marks its birth.

Interesting fact! After the birth of the new Moon, 18.5 years must pass before the Sun and the Earth’s satellite again find themselves in the same zodiac sign and degree. This is called the Saros cycle. 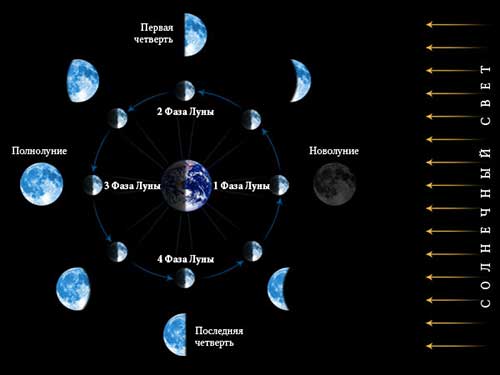 The effect of the new moon on the human body

The birth of a new moon has an extremely negative effect on the human body. During this period, under the influence of a satellite in a person:

Many scientific trials and experiments have shown that the New Moon period is extremely unfavorable for humans, especially for men. A strong half of humanity is going through this cycle especially hard. Men may not recognize themselves, because they have a strange feeling of indifference to everything that happens. If you ask your spouse or boyfriend to do some household chores or other chores at this moment, most likely you will run into a refusal.

It is highly discouraged to engage in heavy physical work on New Moon, because it is fraught with injuries, especially when it comes to sports activities. Most of the heart attacks, conflicts and aggressive surges were recorded by scientists precisely during the appearance of the new moon. A man can fall into depression, the severity of which is determined by the will and strength of the spirit of the strong half of humanity – the strong in spirit bear it easier, and the weak are much worse.

Important! Psychologists and astrologers recommend devoting time to the New Moon to create plans for the future, but not to implement them, due to emotional instability.

The human psyche suffers during the appearance of the young moon. Apathy and irascibility are not the only things people can expect at this time. Some, feeling incomprehensible melancholy, may become depressed. On New Moon, a person’s self-esteem is underestimated – it does not want to increase, no matter what you do.
You do not need to worry, because these phenomena are normal, and psychologists recommend:

It is enough to make these two adjustments in your thinking, as the New Moon period will seem to you not so painful.

Cleansing procedures will help to survive the adverse effects of the moon on the body. During the birth of a new moon, it is recommended:

It will not work to avoid the effects of the New Moon on the human body, but it will turn out to reduce the adverse effect. And now you know how to do it.