The roof is a small shelter from storms

There are configurations through which the Higher Forces guard the owner of the horoscope and extend a helping hand to him to pull him out of the swamp of adversity. The roof resembles a triangle, where the base is sextile and the sides are half-sextile at 30 °. It is not constant. It arises when help is needed, but the protected native also needs to act quickly while he is in the “house”: to grab the chances in work, personal relationships, or, for example, in the field of health, when a place suddenly becomes available for an appointment with a miracle surgeon.

If the opportunity is missed, then over time it will be offered again, but the regular ignoring of space aid will lead to the fact that a person will be left alone with a shaft of problems, which is played out very harshly. Interestingly, the opportunities come different, but on one issue, most often indicated by the top of the triangle.

Features of the Roof's influence on fate 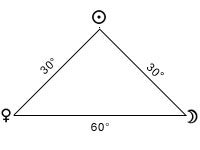 If in crisis moments the figure acts like a shelter and an ambulance, then in normal times it harmonizes relations with others, endowing the ward with soft charm, especially if Venus and the Moon are included in it , allowing you to get what you want thanks to the sympathies of friends, bosses and colleagues. At the same time, they have an independent desire to help, without additional requests from the native. Two sides of the Roof influence:

1. A person gets a positive experience through interaction with the team, society, choosing the best support options.

2. Diffusion of forces in many tempting areas of manifestation of talents, when you want to succeed in business, and sing on stage, and defend your doctorate.

The difference between the figure and other triangular cosmograms in the open channel of cosmic energy, which gives the native a spiritualized appearance and gaze, as well as an internal desire to reject base instincts, retire in silence, a tendency to prayers or poetic meditations. She also gives artistry, innate graceful manners and the ability to confidently behave in a secular society.

Features of the manifestation of the Roof in the horoscope:

Subject to these conditions, the Roof helps to find wealth, love and fully realize the talents of the creative side of the individual. This is a figure of an evolutionary program that implies a mission on Earth, and passivity is destructive here.

Examples of the Roof from Life

Depending on which planet is at the top, the cosmogram appears on different planes. If the Moon is in focus , peacekeeping is shown. Diplomacy and charity bring great happiness and, like a magnet, attract other benefits. A person is constantly drawn into conflicts in order to manifest his gifts in practice. When the native avoids this, then internal stress and fears affect the destruction of the nervous system, as a result, hypertension and excess weight.

In the Roof M.Yu. Lermontov was attended by the Moon, Venus and Uranus. The former gave him a flow of cosmic poetic information from the higher spheres, defining the unusual rhythm of poetry, sympathy of the opposite sex, despite the flaws in appearance, and Uranus – unexpected situations for the manifestation of talent, for example, the death of Pushkin. But Lermontov did not fulfill the task of reaching the level of cosmic love and creativity.

When a crisis situation arises, and fate throws up options for getting out of it, you should carefully study the properties of the planets in the configuration and their additional aspects in order to make the right decision. In ordinary life, you should also not relax and forget that sextile involves the use of talents from both planets of the participants.

For example, at the base of the Roof there is a sextile Jupiter-Saturn. Surely the native will have a desire to become an influential person in business, law or education. Help from above will immediately appear in the form of patronage for admission to a prestigious university or an offer of work in a foreign company, but to move to a new level, you will need to show the Saturnian qualities of perseverance and perseverance: prepare for exams day and night, learn a new language, without which you will not get what you want. work out.

If these opportunities are missed out of laziness, life will again reveal them through other people, but by giving up several times, there is a possibility of permanently remaining on a low salary or sinking into debt. Ideally, you need to use any opportunity for self-development, then material honors and public admiration will be constant companions.