Mars in the 1st house

The qualities of Mars are especially manifested in a person's character if this luminary is located in the 1st house of an individual horoscope.

Mars in the birth chart is responsible for the manifestation of strength. Sometimes it can be courage, courage, strong-willed pressure, and then the energy of Mars is spent constructively. If Mars is negatively aspected in the horoscope, then the person may be too self-confident, reckless, aggressive and conflicting.

Mars is called the evil planet. Its excessive negative influence can be the cause of unhappy circumstances in life: injuries, accidents (accidents), forced surgical interventions, etc.

The owner of a horoscope with Mars in the 1st house is enterprising, active, straightforward and has great ambitions. The principles of loyalty and diplomacy are alien to him. He was not used to looking back at others and asking someone else's opinion. When there is a goal, it must be achieved in the simplest, fastest and most effective way. The subject will not be embarrassed if brute force is required on his part to achieve a result.

The owner of Mars in the 1st house is practical and hardworking. By their nature, such people are realists. Philosophical reflections, self-reflection and withdrawals are alien to them. Their promotions and personal achievements are the results of their own efforts.

If Mars in the horoscope is unfavorably aspected by other planets, then irritability, anger, explicit or latent aggressiveness are noticeable in the native's character. Such a person seems uncomfortable to those around him, but they pay tribute to his leadership qualities, ability to lead and achieve what he wants.

Such a person is very mobile and most often has a fit physical shape. Sports and active activities are necessary for the native. Thanks to this, he gets the opportunity to dump negative energy or direct it to socially useful affairs.

The characteristics of Mars are most evident in signs such as Aries , Scorpio, and Capricorn . Here this luminary is especially strong, and there are no great contradictions in the native's character. He has great stamina, excellent reflexes and knows how to punch his way in life.

Mars manifests itself more difficult in the signs of Libra , Taurus and Cancer . Such people can hesitate for a long time before making an important and responsible decision. Their activity is fickle. Either they work hard for wear and tear, or they are lazy and relaxed. Such people need to learn to act not intuitively, but according to patterns: in some certain situations (for example, in personal life), you need to maintain balance and show diplomacy, and in other cases (for example, at work) – to demonstrate strength and strong-willed pressure. 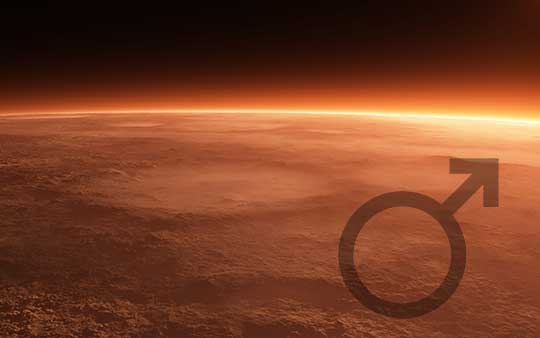 Mars in the 1st house of a man

A man with Mars in the 1st house of the radix is ​​honest, open, overly frank and has an iron will. His desires are simple. He wants to be financially independent, successful in his chosen activities and held in his personal life.

He attracts the attention of women thanks to his truly masculine behavior and good physical shape. Despite some roughness, angularity and harshness, the male conqueror manages to gain the favor of the fairer sex.

Best of all, the owner of the horoscope will be approached by a woman with a soft, kind and compliant character, who will not try to compete with him, but will fully recognize his authority.

Mars in the 1st house of a woman

If Mars in a woman's radix is ​​in the 1st house, then she will show a strong character and an iron grip in business. Her hobbies must certainly include physical education, fitness, sports. Most often, such women feel comfortable behind the wheel of a car, and it's not so much about mobility, but about the feeling of their strength and independence.

In order for your personal life to develop, you need to cultivate feminine qualities in yourself: caring, patience, tolerance and diplomacy.