Almandine – magic and healing properties of the stone

Almandine is the most famous variety of pomegranate, cherry-red as blood, with a violet sheen, and hard as a ruby, with which it is often confused. The energy source of love and passion is called differently – greenlandin, carbuncle, anthrax, vinitsa, Alaban ruby, since in the 15th century the Turkish city of Alabanda was the largest center for its development and sale. 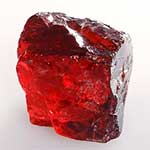 Shades range from light crimson to purple-red depending on the iron content. Jewelers prefer to include transparent stones up to 5 cm in size in their jewelry: the colors of Burgundy wine, called “noble”, and dark red with brown undertone – “falum”.

Almandine differs from ruby ​​by a unique optical property – asterism: when approaching a light source, small stars light up inside. Biblical tradition says that with a starlight mineral attached to the mast, Noah illuminated the path of the Ark in the dark time of the Flood.

In the legends of ancient Greece, it is mentioned that the ancestors of the almandine were the magnetic eyes of the insidious Echidna, a half-woman, half-snake. She left her eyes sparkling with crimson stars on the shore and hid under water, waiting for lovers of treasures. Anyone who managed to steal the eyes of Echidna would open any treasure on the planet. But not a single hero managed to do this.

In the 16th century, the mineral was popular among the courtiers of the rank of count and prince due to its rarity, high cost and complexity in jewelry processing. It was worn by masons and writers, in particular, Count Radishchev and Lomonosov.

The Hellenes believed the magic of the almandine came from Demeter, the goddess of fertility, and Hestia, the patroness of the hearth. This is the strongest amulet for the house from thieves, fires, strife, the source of the flame of love for those living in it.

The magical properties of the stone are known to the astrologers of Persia and Greece, and in the 21st century, the energy of the mineral, infused as good wine, will help:

In the 17th century, almandines embroidered masquerade costumes to have fun without being distracted by routine matters, so wearing it while doing work or preparing for exams is not recommended. 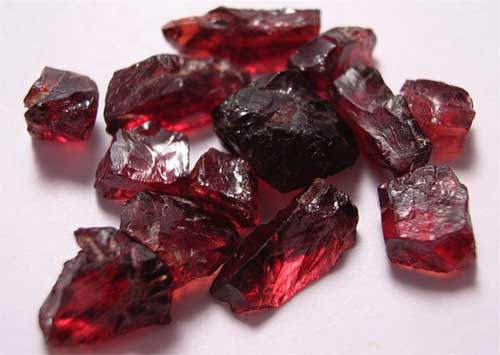 Almandine is unlikely to act on aching old wounds, but it effectively removes phantom pains. It helps to receive the healing powers of the Earth by cleansing and launching the first basic chakra in the process of meditation and yoga.

In Western astrology, almandine is considered a talisman stone for those born in January. He will generously endow Capricorns and Aquarius with self-confidence, a fiery fuse to bring any plans to a brilliant result, and help them become happy in their personal life.

Combining the energies of the elements of Fire and Earth, the stone will ensure success in a career and love for Leo , Sagittarius , Aries , as well as Virgo and Taurus . Scorpios will help to control the plutonic passions seething in them, but Alaban ruby ​​is categorically contraindicated for Cancers and Pisces – an energy imbalance and a nervous breakdown will occur.

Almandine is astrologically connected with Mars , in its highest manifestation endows a person with courage, determination, the ability to live with taste and comfort. With a weak position of the planet in the natal chart , cowardice, weakness, aggressiveness and cruelty become the main features. The magic almandine will help overcome the negative state of Mars, struck by a square with the Sun, Moon, Mercury, Uranus, which will have a beneficial effect on relations with relatives and self-expression in society.