Chrysoprase – medicinal and magical properties of the stone

Chrysoprase is a semi-precious mineral of a cheerful green color, consisting of the smallest crystalline grains of silicon dioxide. Being a variety of chalcedony, it is surprisingly similar to an emerald in its juicy green color and extraordinary hardness.

The name has Greek roots and consists of the words “gold” and “leek”, which symbolized prosperity and good health for the Hellenes. A great admirer of chrysoprase was Alexander the Great, who wore it in the form of a ring and in the composition of more valuable stones in the crown.

The Greeks believed that a green gem protects warriors in battle, bestows victory over enemies and helps to retain power and wealth. Then the mineral was worth fabulous money, beads were cut out of it, gems with images of the faces of military leaders and beautiful hetaira, cups for the nobility, rings and earrings were inlaid.

Egyptian and Roman sculptures carved figurines of gods from it, inlaid the eyes of the statues with the thinnest green plates, and made talismans. Frederick II believed that he owed the power of his reign to chrysoprase in the ring on the index finger and in the center of the crown.

In the 18th century, the chapels of the Czech Republic and Germany were decorated exclusively with mosaics of chalcedony stones, and the leading place in them was given to chrysoprase inserts. Nowadays, the mineral is also in demand due to its unique beauty and magic. The highest jewelry grades include stones of an apple-emerald hue, and light ones with a blue tint – to ornamental.

The gem matches in shade with the energy of abundance and financial success of the Universe, therefore, first of all, it helps the owner to get rich, while attracting opportunities for creative abilities to him. He drives away melancholy and depression, makes you believe in success and take active steps to achieve it.

Silver-edged chrysoprase will be especially powerful and beneficial:

The stone has great strength and does not tolerate swindlers and liars: it brings them out into the open, so altruists who are pure in heart and thoughts can wear it without fear. It is not recommended to give it to children under the age of 14, whose psyche is just being formed, but for adolescents, a green gem will benefit, since it cools anger, relieves irritability and reconciles with the surrounding reality, keeping them from rash acts. It will be an excellent talisman for reformers, politicians and inventors, since it supports everything new. 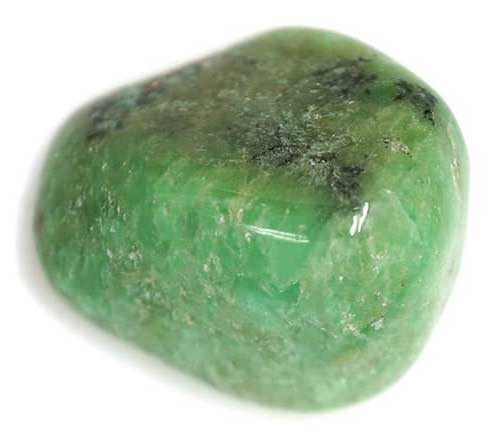 Chrysoprase quickly and effectively opens the blocked heart chakra, clearing it of resentment and stress, thanks to which, on the mental level, a person gains the ability to love and express this emotion openly, and on the physical level he heals from hypertension, anemia, headaches, hysteria and chronic fatigue.

To achieve this effect, it is necessary to wear the stone on a silver chain or white gold setting at the center of the chest, or on the ring finger in a ring for at least a month every day.

The healing properties of chrysoprase extend to other body systems, it contributes to:

You should not wear the gem constantly for more than 30 days, it is believed that it strongly affects the gallbladder and can provoke the discharge of stones at the wrong moment. The stone does not like sunlight; it must be stored in a silk bag in a cool place.

Chrysoprase patronizes honest fighters for justice, therefore it will become an excellent companion for Aquarius , Capricorns , Pisces and Virgo , who love to put the universal principles of equality into practice in an orderly and fruitful manner.

It is difficult for Libra and Gemini to hesitate before the choice to withstand the energy power of the green gem, and Sagittarius , on the contrary, is too assertive and uncompromising in order to accept the help of the stone. For Cancers and Taurus, he will help express emotions and sympathy more openly, bring them out of the shadows.

Contraindicated mineral Lions , Scorpio and Aries , astrologically incompatible with its energy. The stone begins to vampire and instead of support, it takes optimism and willpower.

Chrysoprase is associated with three planets at once – Uranus , Jupiter and Mercury . This explains such a strong love for him on the part of the kings, because such a trio favors the introduction of reforms and a change in the world order, endowing with commercial success, eloquence and unlimited power. It is recommended to wear a green gem in a weakened position in the natal chart of Uranus in Scorpio and Leo, Jupiter in Capricorn and Virgo, Mercury in Pisces, as well as in the presence of many negative aspects to them from other planets.